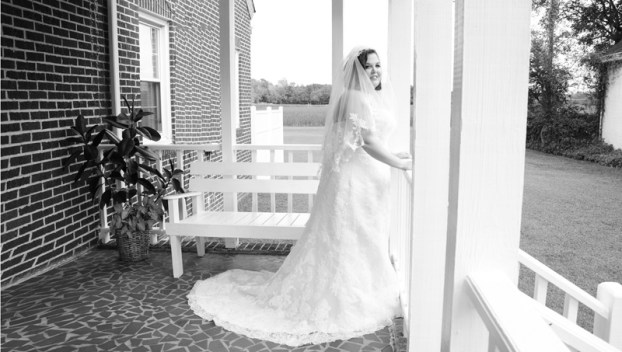 The bride is the daughter of Mrs. Peggy Bonner Jefferson of Washington, NC and the late Jesse Ronald Jefferson.

The bridegroom is the son of Ms. Bobbie Styron and Mr. Ray Fulcher of Beaufort, NC and  Mr.
Donald Ferguson of Grantsboro, NC.

The wedding was held in the barn at Fox Hollow.

The Bride, who was escorted by her mother, wore a laced-detailed ivory gown by Mary.    Her bouquet of green hydrangeas, pink roses and white calla lilies was wrapped in burlap. It was accented with her mother’s handkerchief, her maternal grandfather’s initialed cufflink and her brother’s infantry cross rifle pin.

For her daughter’s wedding Mrs. Jefferson wore a knee-length dress of champagne with a sheer overlay.

Ms. Styron, the bridegroom’s mother, chose a knee-length floral of pink and green.

A buffet reception followed at the Farm with after dinner dancing.

The couple traveled by vintage limousine from Fox Hollow Farm to Elmwood 1820 Bed and Breakfast for the evening.  They continued honeymooning in Beech Mountain, NC.

The Fergusons will reside in Washington, NC.

Pre-wedding events included a shower at the home of Mrs. Babs Chandler on March 12 hosted by her aunts.  Mrs. Susan Sterling Pendergrass, hosted a shower with the bride’s co-workers at First South Bank Distribution Center on March 11.

The bride was honored with a bridesmaids’ luncheon at the home of Mrs. Jean Lee on April 22.  Hosting were Mesdames Jean Lee, Almeta Woolard, Ruth Schmidt, and Kristi Carter.

The rehearsal dinner was hosted by the father of the groom, Mr. Donald Ferguson, at First Church of Christ Family Life Center in Washington, NC.