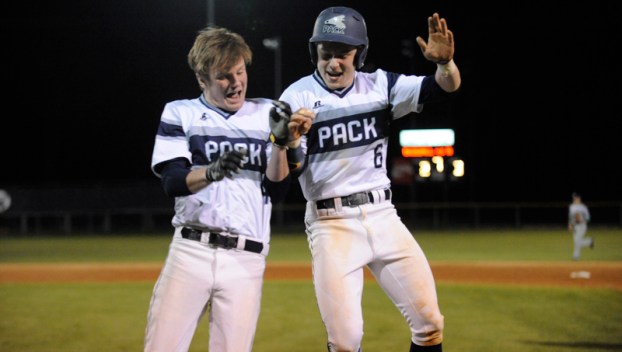 Drew Ferguson and Frederick Holscher celebrate after Holscher earned the game-winning walk in the seventh inning.

Washington off to 2-0 start in ECC after clipping Hawks

North Lenoir hadn’t lost in the 2-A Eastern Carolina Conference since May 7, 2015.

Then along came the Pam Pack. Washington broke a 2-2 tie in the bottom of the seventh when Frederick Holscher drew a bases-loaded walk that brought in Jeremiah Moore. With that, the ECC newcomers sent a message to the rest of the league.

“That felt good,” coach Kevin Leggett said. “They were undefeated in conference the two years before this. It’s good to come into this conference and start off with two wins this week.

“We did what it took, offensively. We didn’t get a lot of hits, but we scored when we could. … It doesn’t take much; walks, one hit, and that’s run or two.”

The Hawks got two early runs from Pam Pack starter Logan Everette. The junior settled in soon after. The only hit he allowed from then on out was a single right back to him in the top of the seventh.

Washington drew even in the bottom of the fourth. Cooper Anderson laced a two-run knock through the left side to bring home Chris Sulc and Holscher. It was enough to tie the game at 2-2, and the Pam Pack defense took over from there.

“I think our pitching is speaking for itself,” Leggett said. “Early in the game, we had a couple of walks and a couple of fastballs that gave them one. Other than that, (Everette) was on tonight. I think he had some home varsity jitters a little bit.”

Everette only faced the minimum of nine batters over the final three frames. He allowed a two-out base hit in the seventh, but that runner was erased when Anderson caught him trying to steal second.

Washington nearly pulled ahead in the bottom of the fifth. Sulc and Holscher drew a pair of two-out walks to load the bases, but a pitching change resulted in a strikeout that got North Lenoir out of the jam.

That was about all the Hawks’ staff could muster, though. They held Washington in the sixth, but used three different pitchers that issued four-straight walks in the seventh.

Next week will be another test for the Pam Pack. It will host Ayden-Grifton before traveling to South Lenoir. The Chargers already have six wins on the season. The Blue Devils, like Washington, also won their first two ECC games.