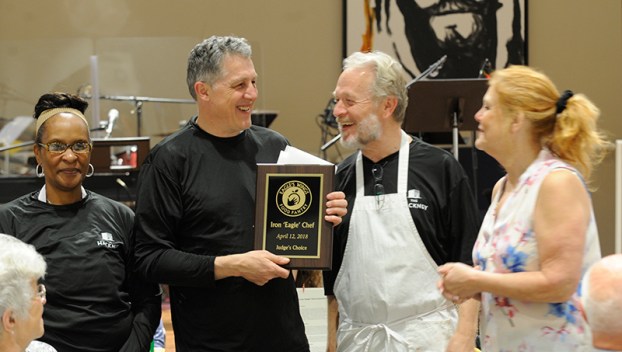 Participation is the key ingredient

Many nonprofits operate in Beaufort County, in place to fill the gaps where there is need.

One of those needs is food. It’s estimated that one in four children in the county are what’s considered “food insecure,” meaning outside of school, they might not know when and from where their next meal is coming.

It might not be readily apparent who these children are, but they do exist, as attested to by the number of clients Eagle’s Wings food pantry in Washington serves each and every month, as attested to the backpack programs that send children home from school on Fridays with food to make it through the weekend.

Eagle’s Wings may be located in Washington, but this year, the organization has taken the food pantry on the road, traveling to Aurora to deliver food to those who are unable to travel to Washington. Aurora has been known as a “food desert” since the town’s only grocery store closed several years ago; there, up to 10 percent of the population is “food insecure.”

Eagle’s Wings is a nonprofit and does not receive funding from the state or federal government. Instead, it relies on donations to help it fill the food gap in Beaufort County.

Thursday night, the agency held its second Iron Eagle Chef competition — a fundraiser — at First Christian Church in Washington. The fellowship hall of the church was packed with ticketholders who got a sampling of fine fare, each entrée made with a common ingredient: this year, it was sweet potatoes. Three local chefs participated. Another two served as judges for the competition. Everyone came with a hearty appetite and left having voted for their favorite iteration of a sweet-potato-based meal.

More importantly, they came with the $35-per-person admission fee and/or more cash for the silent auction items donated to the event, a 50/50 raffle and another raffle, of sorts, in which one winner walked away with a bottle of wine worth more than $100.

More importantly, they left having participated.

The people who hold these events and volunteer for them — from the chefs and judges to Beaufort County Community College culinary arts program volunteers and the church youth group servers — should all be commended for their participation, but so should those who showed up.

Participation is the key ingredient. Each person participating plays a role; perhaps that $35 ticket cost will help a single mom feed her children. Perhaps it will supplement the food supply of an elderly person living on a fixed income.

The entrees were good on Thursday night, but the intent — to anonymously help one’s neighbor by participating — was even better.

An invisible tragedy: the plight of homeless families in Beaufort County

Jennifer (not her real name) stuffed as much as she could into two large black garbage bags. Her older... read more