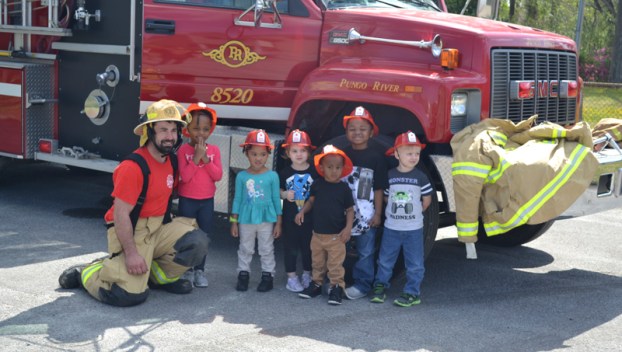 GRAND VISIT: The Pungo River Volunteer Fire Department paid a special visit to the Belhaven Library last week, inviting a total of 36 toddlers to check out their equipment. Children visited from Terra Ceia Christian School, A New Adventure of Washington, and Totsland of Belhaven. The event started with a story-time led by the library’s youth director, Erin Gathercole. Then, retired librarian Lynn Paul, her daughter Jenny Hellickson and Eric Sawyer all appeared decked out in their fire gear and took charge telling the kids the do’s and don’ts of fires and fire hazards. After a short span of listening, the kids than geared up with their fire hats and went outside to get a grand tour of the fire truck. They put on the fireman’s coat to get a feel of what it’s like to have on all the gear and were then given a tour of the fire truck. After the tour, the library provided each group with a fireman certificate and a snack courtesy of The Friends of the Belhaven Library. The Belhaven library has more events planned in the near future for kids of all ages, and invites the community to come join in the fun.

WITH MUCH LOVE: On Feb. 14, in recognition of Valentine’s Day, Jo Dee Anderson, Michelle Rhem and approximately 60 students... read more