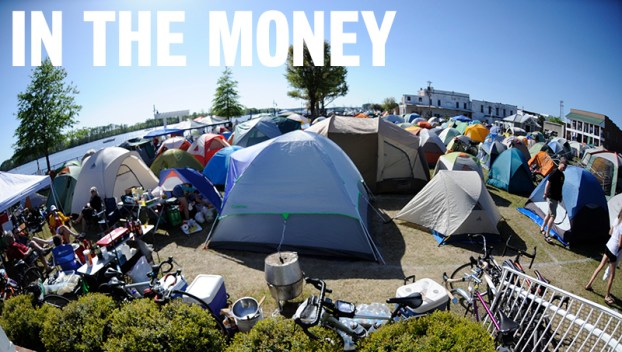 BRINGING IN THE BACON: The economic impact of cyclists visiting our area was tremendous, with many businesses reporting their best weekends so far this year. (Vail Stewart Rumley/Daily News)

While the Cycle NC participants last weekend touched many miles of Beaufort County roadways, the presence of 1,800 cyclists and their families also touched nearly every aspect of the economy in Washington.

From pumped up fuel sales at local gas stations and solid bookings at Carolina Avenue hotels to tremendous boosts for retail stores, restaurants and bars, the economic impact of these visitors cannot be overstated.

So how good was it?

A number of downtown business owners weighed in on the benefits gleaned from the weekend, sharing what they saw.

For nearly every location within walking distance of the waterfront, foot traffic was dramatically increased. For retail shops such as the Thrifty Gifter, this equated to excellent sales numbers.

“The foot traffic was tremendous, and sales were probably the highest since they have been since the holidays,” store owner Jenny Smith said. “The folks that came in here were absolutely wonderful. They were so sweet, and they all seemed so excited to be down here.”

At Wine and Words and Gourmet, store owner Mary Melich shared a similar experience, citing the highest sales since she and her husband, Mark, took ownership of the store in January.

“We had the best weekend we’ve had yet this year,” Melich said. “It was a phenomenal group; very respectful. I think having music down here on our end of the street helped.”

This same experience was replicated at downtown bars and restaurants, even if it may have looked a little different. For the owners of Ribeyes Steakhouse, only one thing could have made the weekend better.

“I wish I would have had about six more kegs of beer,” restaurant owner Justin Pate laughed. “It was an amazing weekend. The patrons we had were super nice, and as far as financials, we had a great weekend.”

While the benefits spread heavily throughout the area, perhaps no business in Washington was able to capitalize on the weekend’s festivities quite like Inner Banks Outfitters. With the waterfront cycling market cornered, the bike shop made out very well on merchandise sales and cycle repairs.

“Our sales were probably quadruple what they would have been on a weekend like this without the ride,” Inner Banks Outfitters proprietor Liane Harsh said. “We made a lot of contacts, so it was a lot of relationship building. There was just, in general, this really cool energy. It was fun. That is season-changing for us.”

While the dollar signs are important, each of these business owners also touched on another common theme — the quality of people who visited the area. In three years’ time, when they return to Washington, these cyclists will undoubtedly be welcomed back with open arms, not just for their money, but for their good company and the breath of color they bring to Beaufort County.

Not many things these days are made to last a century. Fewer still will meet the mark of 110 years,... read more