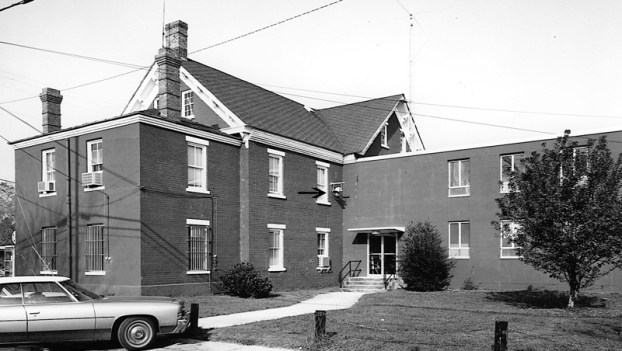 OLD COURTHOUSE: Built in 1921, the old Hyde County Courthouse bell once hung on the southeast corner of the courthouse, but it was moved to this location (arrow in center of photo points to bell) following a 1960s remodeling of the building. (N.C. State Historic Preservation Office)

The Swan Quarter Volunteer Fire Department is known for lending a helping hand to other Hyde County communities in addition to the firefighting and first-responder services it provides.

A good example of this is the successful mainland-wide food drive it held last year to restock the Bread of Life Food pantry on Ocracoke. Now, the department agreed to another project with far-reaching interests — the Hyde County Courthouse Bell Project.

During the 1920s, on the southeast corner of the historic 1857 Courthouse, there were wooden steps that led up to the second floor, and at the top of the steps there was a small wooden landing. A cast-iron bell made in Chattanooga, Tennessee, by the Ross-Meehan Foundry hung on a pole on that landing. It was rung to summon court back to order after lunch breaks and at other times to let the community know about fires or impromptu meetings. Following a remodeling of the courthouse in 1962 that added annexes connecting it to the Agricultural Building, the bell was relocated just outside the new double-glass doors on the west side of the annex. At some point, the bell was relegated to the attic of the old courthouse, where it was later discovered by Merita Spencer and Pam Sawyer from the Register of Deeds office. They moved the bell to their office on the first floor.  In 2007 when the new Hyde County Government Center was completed, it ended up in their office in the center.

Current plans are to raise funds to build a permanent covered display area, which will include a small park and benches, in the greenway between the new and old courthouses in the county seat of Swan Quarter. It is anticipated that the overall project will cost about $16,000. Hyde County native Ben Cahoon, of Cahoon & Kasten Architects, Nags Head, has agreed to donate his services to execute the necessary drawings and construction plans.

Fire Chief Jeffrey Stotesberry explains his interest in the project: “I love Hyde County history and the stories the old-timers have told about how things were ‘back in the day’. The (department) has always supported the Hyde community and this is just another way to bring everyone together to help preserve a small piece of our heritage.”

Stotesberry acknowledges that it will take widespread support to make the project a reality, and he said that the first in a series of fundraisers is already underway. Tickets are being sold throughout the county for a 50/50 drawing to be held July 4. Fifty percent of the proceeds will go to the raffle winner. The historic bell is on display at the station, and tickets will also be available at the monthly lunch/dinners the department holds. The seed money generated by this event will be used for postage and other expenses incurred in letting the public know about the project.

A letter campaign will begin soon to encourage individuals and businesses to donate generously. “No donation is too small,” Stotesberry said. “We know there are many folks with a love of Hyde County, who have roots and fond memories of the county that we can count on to help us reach our goal.”

Donations are tax-deductible to the extent allowed by law and may be mailed directly to: Swan Quarter VFD, P.O. Box 97, Swan Quarter, N.C. 27885. Mark checks with Hyde Bell on the memo line.

The Swan Quarter VFD was established in 1971 by a group of residents who were concerned with providing an organized fire-safety presence for the community. Since that time, its area of operation has expanded, as has the level of services it provides. Today, the department operates with 25 unpaid volunteers who provide not only fire incident response, but also first-responder service for medical emergencies. It also works with Hyde County Schools to promote fire-safety awareness to the youth of the community.

It’s a sure sign of the arrival of visitor season on the Outer Banks — the North Carolina ferry system... read more