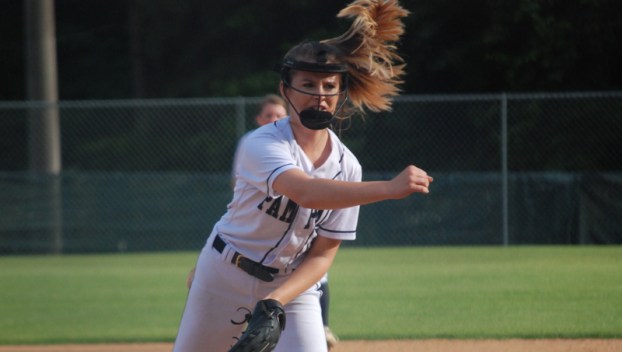 DOMINANT IN DEFEAT: Washington’s Abbi Tucker watches as one of her pitches hits the catcher’s mitt during Tuesday’s 1-0 playoff loss to Whiteville. Despite the loss, Tucker played exceptionally well, allowing only three hits, including two bunts, and racking up 10 strikeouts. (Sean Finnerty | Daily News)

WASHINGTON — An awkward bounce of the ball was all that separated Washington and Whiteville in Tuesday’s third-round playoff game, as the Wolfpack emerged victorious, winning 1-0 in a game dominated by pitchers Abbi Tucker and Ivy Hayes.

The Pam Pack’s Tucker was commanding throughout Tuesday’s game, throwing 10 strikeouts, while limiting Whiteville to three hits. Unfortunately for Washington, those three hits all came in the fourth inning and led to the only run in the game.

The Wolfpack’s Raeganne Sholar and Kiara Wilson led off the top of the fourth with back-to-back bunts, becoming Whiteville’s first base runners of the night. Kourtney Granger followed with a sharply hit ground ball that headed straight to shortstop Summer Campbell. But unfortunately for Campbell and the Pam Pack, the ball took an awkward bounce over the shortstop’s glove, allowing a run to score. Tucker made sure no more damage was done, striking out three Whiteville batters to end the inning, stranding members of the Wolfpack on second and third.

Washington coach Doug Whitehead, who described Whiteville as a good hitting team, said the Wolfpack did what it was supposed to do after going several innings without registering a hit.

“They figured out they couldn’t hit (Tucker) so they bunted. (Whiteville) successfully got down a couple of bunts and then advanced the runner; and that was the difference in the ball game,” the Pam Pack’s coach said.

Whiteville’s Hayes was just as impressive as Tucker, allowing six hits and fanning 12 Washington batters. There were a couple of spots when the Pam Pack put runners in scoring position, but Hayes responded both times by getting a strikeout to end the inning.

The most crucial moment came in the bottom of the sixth. The top of Washington’s batting order was coming to bat, making it the Pam Pack’s best chance of scoring so late in the game. Mary B. Dixon, Emme Davis and Tucker all hit singles to load the bases, piling the pressure on Hayes. But with two outs, the senior rose to the occasion and got a strike out to put out the fire and end the inning.

“We scattered some base hits here and there, just didn’t put it together. Left the bases loaded once, couple of runners on a couple of other times,” Whitehead said. “Sometimes the softball Gods work for you, sometimes they don’t.”

In a game ruled by pitching, Dixon had the most success at the plate. The senior had a game-high two hits, including a stand-up double in the bottom of the first. Along with Davis and Tucker’s hits in the sixth, Sydney Keech and Desiree Maurizzio reached base with a hit each in the third to round out the game’s hitting.

Tuesday marked the second year in a row that the Pam Pack was knocked out of the playoffs in the third round, after Eastern Randolph eliminated Washington last year with a 6-5 win.

Whitehead, who’s coached the team for the last 12 years and been involved in some way for the past 16 years, can’t recall the last time Washington finished the regular season with only one loss.

“It’s a very good team , very proud of them,” Whitehead said. “I wish the seniors the best of luck and see if we can rebuild and come back next year.”

WASHINGTON — Washington’s dreams of making a deep run in the NCHSAA 2A soccer playoffs came to an end Saturday... read more