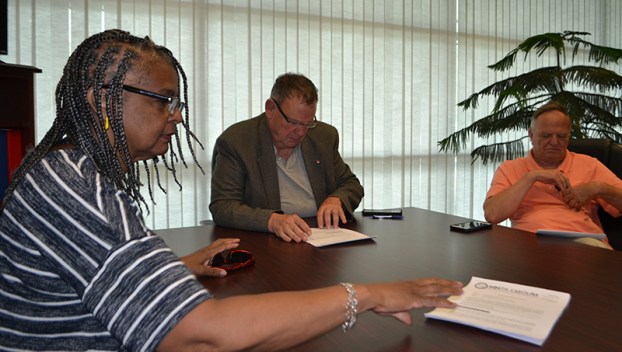 Some candidates picked up several votes as a result of the Beaufort County Board of Elections’ canvass Friday, but not enough to change outcomes in the primary contests.

Vote totals changed as a result of votes on 14 provisional ballots and six absentee ballots being added to the vote totals from early voting and Primary Day. Five provisional ballots were rejected because people who marked them were not registered voters or were registered outside Beaufort County. Three absentee ballots were rejected because they were postmarked late or received after the May 11 deadline.

“We look at the call-in sheets. We make sure that we didn’t do any call-in errors. We look at the tabulator tapes. We just audit all the numbers to make sure nothing is off kilter. … The only thing that was found, which was documented on Election Day, was a ballot from Chocowinity (precinct) went into Gilead (precinct),” Hopkins said, adding that a voter placed a ballot into the wrong vote tabulator. The two precincts, for now, share the polling place at the Chocowinity Fire Department.

Hopkins said there would be no recounts in primary contests.

In the Republican primary for Beaufort County sheriff, incumbent Ernie Coleman picked up six votes during the canvass, giving him a total of 2,964 votes. Challenger Donald Dixon picked up two votes, for a total of 870 votes.

In the uncontested Republican primary for the 79th District seat, Keith Kidwell’s vote total in Beaufort County rose from 3,059 votes to 3,064 votes.

In Beaufort County, incumbent Walter B. Jones saw his vote total increase from 1,562 votes to 1,566 votes in the Republican primary for the state’s 3rd Congressional District seat in the U.S. House of Representatives. Challenger Phil Law’s vote total went from 1,505 votes to 1,507 votes. Scott Dacey, who also challenged Jones, picked up no additional votes during the canvass.

At its June meeting, Washington’s City Council will consider lowering the speed limit on Stewart Parkway and Water street to... read more