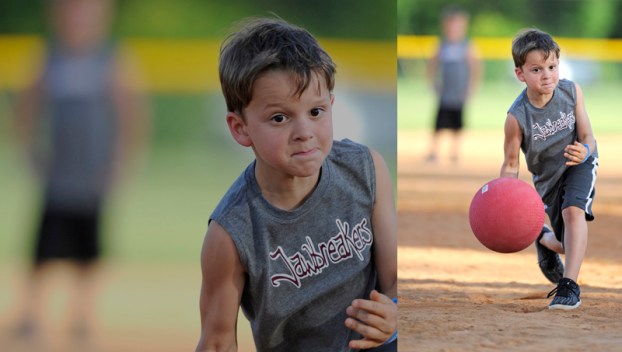 ROLLING: Henley Pake pitches for the Jawbreakers during the Bath Elementary School PTO Kick-Jam kickball tournament. The event raised funds for playground improvements at the school and featured games in age divisions from kindergarten through adult. (Ashley Vansant | Daily News)

BATH — If someone drove by the Bath Rec Complex Fields on Tuesday night, they couldn’t be blamed for thinking there was a championship game being played, with the sight of the parking lot overflowing with cars, the sounds of the cheering crowds and the enticing smell of barbecue sandwiches, pizza and hot dogs in the air. After all, why else would so many people be at the fields on a weeknight?

But in fact, it was yet another example of how tightly knit the community of Bath is. Those hundreds of people came together at the rec fields for the Bath Elementary School Parent Teacher Organization Kick-Jam kickball tournament, a fundraising event looking to raise money for playground improvements for Bath Elementary School.

19 teams, consisting of 8-10 players, took part in the tournament, with dozens more watching on from the stands. The different teams, which each paid a $75 registration fee that went towards the playground fund, were divided into four divisions.

What really demonstrated the coming together of the community was who participated. Bath students understandably made up the numbers on the teams in the younger divisions, but the oldest division wasn’t just comprised of the parents of Bath students.

There were current Northside students who didn’t even attend Bath as elementary school students, former Washington High School students and others there to have fun and help with a good cause.

The large turnout and strong support from the community didn’t come as a surprise to Maecy Douglas, the secretary for BES PTO, who was in charge of the event. She did admit she was worried attendance might’ve suffered after the event was postponed from last Friday due to rain, but she was happy at how many people showed up and how supportive they were.

“We’re a very close-knit community. And also one thing, this playground doesn’t just benefit the school. It benefits the Bath community because these are our rec fields (too), and when there are rec games, there are siblings that are out here playing on the school playground,” Douglas said. “And really this is the only playground in Bath for the community to come to. So I think people see it as a positive thing for the community, so that’s why they’re willing to come and help.”

Douglas said her goal was to raise $2,000. That mark was easily passed, as over $3,000 was raised Tuesday night through team registration fees and sales from concessions.

Douglas said with the money raised, the PTO hopes to add a basketball court to the playground this summer. She also said the organization hopes one or two more things, like a merry-go-round, or picnic tables and a gazebo can be added to the playground as well.

While the tournament was a fundraising event, it was still a competition with champions crowned. The Pink Divas won kindergarten-to-second-grade bracket, the Bone Crushers took first in the third-to-fifth-grade division, Bath Elite proved its name correct by winning the sixth-to-eighth-grade division and the Shockers took the title in the ninth grade-to-adults bracket.

The BES PTO accomplished two things Tuesday night. It met its fundraising goal and also provided a fun night for the community.

“It’s a good environment, it’s fun, everybody is friendly, a lot of good sportsmanship, it looks like everybody is having fun,” Josue Ramirez, a Northside student and member of the Shockers, said.