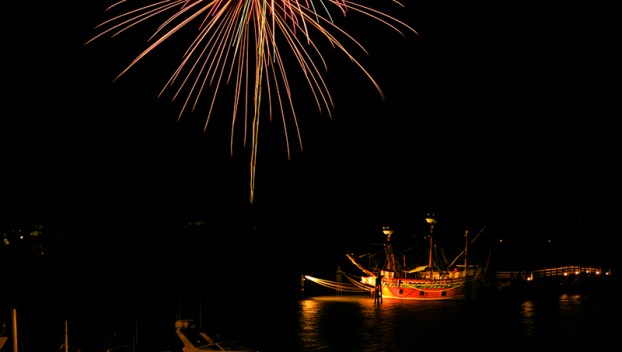 Celebrate Independence Day at Historic Sites that formed the Nation

By N.C. Department of Natural and Cultural Resources

RALEIGH — There are many ways to celebrate the Fourth of July, but none more authentic than at a state historic site that played a role in the march to independence for the American colony. Roanoke Island Festival, Historic Halifax, Historic Edenton and Tryon Palace all were part of the creation of this nation and will celebrate with history, fireworks, music or a reading of the Declaration of Independence.

Roanoke Island Festival Park will host the 208th U.S. Army Band for patriotic music at the pavilion lawn stage at 8 p.m., followed by the town’s fireworks. Refreshments will be sold. Bring lawn chairs or blankets for this free program.

Roanoke Island was settled by the English in 1587 with a group of 150 men, women and boys. The voyage organizers departed for England to get more provisions. When they returned they found the colony abandoned with no sign of the settlers, even the first child born to English parents in the Americas, Virginia Dare. It remains a mystery what happened to the Lost Colony.

Historic Halifax will offer guided and self-guided tours of historic buildings, living history demonstrations, a scene from an outdoor drama, followed by a reading of the Declaration of Independence, starting at 10 a.m. The town’s celebration begins at 5 p.m. and includes music, food, children’s activities and fireworks.

North Carolina’s Fourth Provisional Congress met in Halifax and created the Halifax Resolves April 12, 1776, the first official action by a colony calling for independence from England. It was a model for others and predated the July 4, 1776, Declaration of Independence for the United States.

Historic Edenton will host a reading of the Declaration of Independence at the 1767 Chowan County Courthouse at 11 a.m. and a free program by the Daughters of the American Revolution. A 9 p.m. fundraiser on the deck of the 1886 Roanoke River Lighthouse will feature food, beverages and fun and a great view of the town’s fireworks.

A group of 51 women in Edenton agreed to draw up plans to boycott English tea and other imported goods. The document was sent to England, and was the first political act by women in America. It was the subject of a satirical cartoon in a London newspaper and became known as the Edenton Tea Party.

Tryon Palace will celebrate the glorious fourth starting at 10 a.m., with historic games, crafts, exhibitions and a reading of the Declaration of Independence. The Fife and Drum Corps will perform and there will be access to the palace gardens.

Royal Governor William Tryon had the extravagant palace built, with the official opening Dec. 5, 1770. The business of the province was executed there. Royal Governor Josiah Martin fled as the patriots approached in 1776. Governor Richard Caswell became the first governor of the state to live in Tryon Palace December 1776. The palace was destroyed by fire in 1798, but restored and reopened in 1959.

The Division of State Historic Sites is within the North Carolina Department of Natural and Cultural Resources.

RALEIGH – To assist drivers during the busy July 4 holiday this week, the N.C. Department of Transportation will suspend most road construction... read more