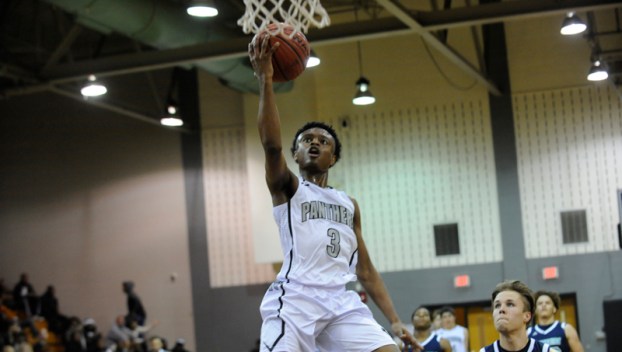 Northside jumps on Southside for early lead, coasts to victory

PINETOWN — The Northside boys basketball team earned a spot in the championship game of the Northside Christmas Tournament with a resounding victory over rival Southside on Wednesday, defeating the Seahawks, 80-39.

Northside (5-2, 1-0 1A Coastal Plains Conference) quickly took control of the game, hounding Southside (3-3 1A CPC) into turnover after turnover, and the Panthers quickly converted those into points. Led by Rashod Smith’s 27 points, Northside built a 26-14 lead after a quarter of play and extended its lead to 51-25 by halftime.

Panthers coach Jared Adams was pleased with his team’s performance, but as with all coaches, found aspects his team could improve upon.

“It was a good win for us,” Adams said. “The guys, we came out a little sluggish, but as the first quarter went on into the second quarter, they started to gel a little bit more. I think it might’ve been just the anticipation waiting before the game. They did well, they executed, did a good job of boxing out and sealing to get rebounds, cutting, being unselfish. A lot of times we were a little too unselfish. I thought we should’ve taken a little more shots underneath. But other than that, they played a good game of basketball.”

Most of Northside’s points came in transition after forcing turnovers and by driving to the basket. Along with Smith, Johnathan Clark and Kenneth Winfield had success on the night getting to the rim, as they scored 14 points and 10 points, respectively.

“We didn’t follow our game plan of stopping the drive,” White said. “We’ve just got to do a better job of sticking to our game plan that we had set for the game and actually follow it.”

Along with struggling to prevent Northside from driving, Southside also couldn’t get much going on offense. Jalen Kirkman was the only Seahawk in double-figures, with 11 points, while Kevin White scored eight points. Point guard Ty Smith, who finished with five points, started the game with a couple of assists after driving and dishing to an open teammate, but couldn’t maintain that production throughout the game.

The win sets Northside up to face Washington County in the tournament’s title game, while Southside will take on Washington in the consolation game.

With its height, Washington County presents a potential problem for the Panthers, but Adams hopes to have his team prepared in the short turnaround between games.

“They’re tall, they’re a lot taller than us. They are quick,” Adams said. “But that’s something we’re going to discuss before the game and try to work on and see if we can just play organized basketball. And hopefully if we can do that, we can come out with a win.”

PINETOWN — A costly second quarter where the Washington boys basketball team was outscored by 12 points doomed the Pam... read more