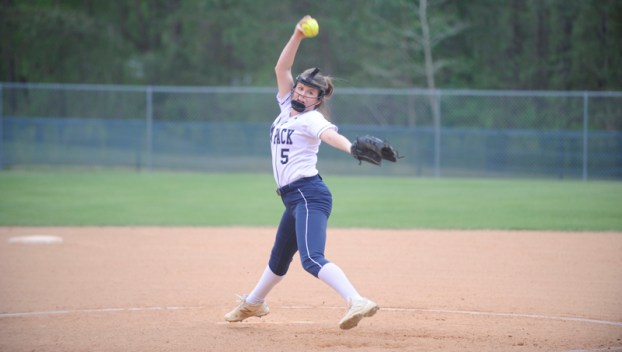 SECURITY BLANKET: Washington’s Abbi Tucker winds up to throw during Friday’s win over Ayden-Grifton. In a game where the Pam Pack struggled to generate offense, Tucker’s quality pitching was much needed, as she held the Chargers to one run on five hits while recording seven strikeouts. (Sean Finnerty | Daily News)

WASHINGTON — With Washington not having lost in conference play since 2017, one couldn’t have been blamed for thinking the Pam Pack was in store for a routine victory at home against league foe Ayden-Grifton on Friday night. Instead, Washington found itself locked in a pitchers’ duel and its bats rendered ineffective.

Fortune turned out to be on the Pam Pack’s side on Friday, as it managed to scrape together a few hits in the bottom of the seventh and an unfortunate mistake, from the Chargers’ perspective, saw the ball go flying from the pitcher’s hand during her wind-up, allowing the winning run to come home and give Washington a 2-1 walk-off victory.

Washington (13-0, 9-0 2A Eastern Carolina Conference) has now won 21 consecutive games against conference opponents. But it doesn’t mean the Pam Pack takes conference opponents lightly, as a loss to Ayden-Grifton (8-7, 4-4 2A ECC) would’ve put Washington just a game ahead of South Lenoir for first place in the league standings.

“Wins that like that are sort of like children; you even love the ugly ones. So, we’ll take it,” Washington head coach Doug Whitehead. “It’s a tough squad, we’ve got a tough league and that sort of helped us a little bit tonight. We’re in a good position right now. I told the girls before the ballgame that was a key (game).”

The Pam Pack started off brightly enough, scoring the game’s first run in the bottom of the first. Summer Campbell led off with a base hit and advanced to third, courtesy of an Emme Davis double. Mary Emma Holscher followed by driving Campbell home with a single for the Pam Pack’s only RBI of the game.

The Chargers responded by stringing together some hits in the second to plate a run of their own and tie the game, 1-1. The starting pitchers, Washington’s Abbi Tucker and Charger Kim Gurkins, proceeded to dominate the game.

Tucker pitched all seven innings, allowing one earned run on five hits, while striking out seven Chargers. Her counterpart, Gurkins, allowed two runs — one earned — on five hits, and struck out three batters.

Finally, in the bottom of the seventh, Washington managed to put together some hits. Tucker led off with a single, causing the crowd to cheer louder as it urged on the Pam Pack. Kaylee Elks followed with a bloop single, and Sydney Keech reached on a bunt to load the bases.

The fans in the stands were at their loudest in anticipation of seeing a dramatic finish in the form of a game-winning hit. Instead, they had to settle for Leah Spencer, in as a courtesy runner for Tucker, taking home after Gurkins lost the grip of the ball during her windup, which sent the ball flying behind her past second and into the outfield.

It was an especially heartbreaking ending to the game for Gurkins, who pitched so well and has had personal success against Washington this season, but Whitehead and the Pam Pack are taking every win any way they can.

“That girl has got a lot of trouble for us for some reason; we didn’t hit the ball successfully against her there either,” White head said. “Anyway, it’s one of those things. Thank goodness we got through them. We’ll take it and move on to South Lenoir on Tuesday.”