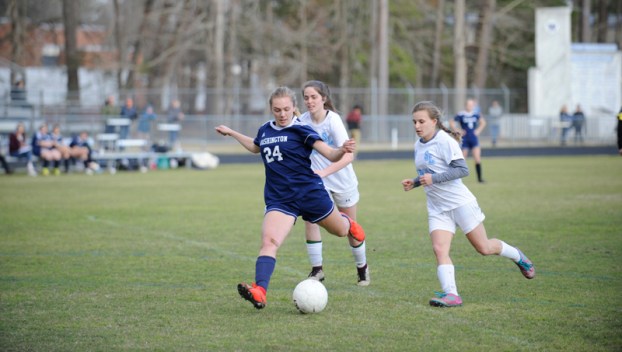 LA GRANGE — Losing 12 seniors from last year’s squad, having just one senior this season and several other team members starting or receiving playing time at the high school level for the first time in their careers could not slow down the juggernaut that is the Washington girls soccer team within its conference.

Playing on the road Tuesday, the Pam Pack brushed aside its closest league competitor South Lenoir, 10-1, pushing its conference-game win streak to 52 and claiming its sixth-consecutive conference title.

While Washington head coach Ed Rodriguez said he thinks there are things his team can improve upon, such as consistency within games, before the playoffs start, he said he is “overall, very happy with winning the conference.”

“It feels good because it’s such an inexperienced group we have. Some juniors, but most of those juniors have never played high school (soccer) before, or this is the first time they’ve even started,” Rodriguez said. “The fact that we are averaging one goal more per game than last year is really impressive because I would have never thought that would be the case after losing all those seniors.”

As has been the case for much of this season, the Pam Pack (10-3, 6-0 2A Eastern Carolina Conference) got off to a slow start, but grew into the game and struck first. Playing a give-and-go with Alyssa Villegas, Rebecca Zerniak found herself free in the penalty area and finished to open the scoring. South Lenoir (9-3, 5-2 2A ECC), second place in the conference and now mathematically eliminated from winning the 2A ECC after losing both games to the Pam Pack, responded by scoring on a free kick.

Seemingly woken up by the Blue Devils’ goal, Washington scored four more goals in the first half. Three came from Zerniak, set up by Villegas through give-and-goes on all three. Lilly Frances Lobos scored the other goal of the half, burying a penalty kick after a South Lenoir handball in the penalty box to make the score 5-1.

When play resumed in the second half, Zerniak bagged herself another goal, giving her five on the day. As the premier scorer in the conference, Lobos had been marked tightly by South Lenoir all game. But after Zerniak’s success drew attention from the Blue Devils, Lobos found space to make an impact. The attacking midfielder scored a pair of goals in the second half, dribbling through the South Lenoir defense before finishing on both occasions. The sophomore now has 48 goals on the season.

Mia Pagnani scored in the second half, knocking the ball in after a corner kick, while Villegas notched her fifth assist of the game — giving her a conference-leading 15 for the year — with a through ball to Claire Shepherd, who buried the ball into the goal.

Having already clinched the conference and a spot in the playoffs with three games still left in the season, Rodriguez said he wants his team to focus on improving defensively.

“We definitely are going to start focusing on (getting) shutouts; that’s got to be priority No. 1,” he said.

Along with working on defense, Rodriguez is looking for his team to improve on transitioning from defense to attack after forcing turnovers and putting together a strong performance on the road against non-conference opponent Northside-Jacksonville — a 3A team that beat the Pam Pack 2-1 at Washington earlier this year — on May 1.

Washington will return from spring break with a game at North Lenoir on April 29 at 6 p.m.

By MITCHELL THOMAS For the Daily News WASHINGTON — Friday night’s showdown between the top two teams of the 2A... read more