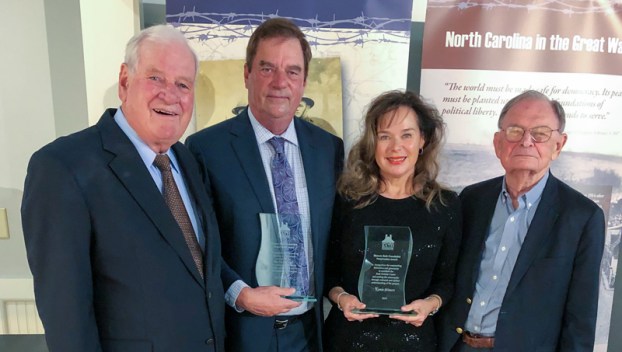 In a town with a history as rich as Bath, it takes a village to make sure the past is preserved for generations to come. At the forefront of that effort, the Historic Bath Foundation has played a key role in a number of projects throughout the town.

On Friday, the Foundation recognized two members who have been vital to that effort. Jerry and Karen Waters received honors during the Foundation’s annual awards ceremony for their leadership and philanthropy in the realms of historic preservation, restoration and enhancement of Bath.

“Karen and I are both from Eastern North Carolina,” Jerry Waters wrote Monday. “ I also went to Bath High School, so I have a desire in preserving the building. We built a house on Bath Creek in 2005 and have enjoyed living here since that time. We both are interested in the history and heritage of the area and feel they should be preserved for the future generations to understand and enjoy.”

The husband and wife duo have been instrumental in a number of efforts throughout the town, including the renovation of the old Bath High School, the creation of Lawson’s Walk, establishing a public library at the old school and restoration of the school’s office wing into an exhibit center for Historic Bath.

During his terms on the Historic Bath Foundation Board, Jerry Waters served as both president and chairman, leading fundraising efforts that brought in nearly $1 million for design and restoration efforts at the old Bath High School. The result of this effort was a brand new exhibit center on the first floor of the school, as well as work to restore the school’s second story.

“These projects were completed through collaboration with various organizations and individuals, all working towards a common goal,” Jerry Waters wrote. “Future fund raising efforts will focus on the restoration of the auditorium and the entire second floor of the building.”

Since its grand opening in 2018, the exhibit hall has hosted a variety of displays significant to the town’s history, including artifacts from the Queen Anne’s Revenge and a collection of antique maps depicting North Carolina.

“She was also a key player in making it possible for the conversion of the south wing of Bath High School into a home for the town library,” said Gene Roberts, the foundation’s vice president, in comments prior to presentation of the awards.

Karen Waters’ efforts on that front also helped bring in funding from the Golden LEAF Foundation for the library restoration. She also provided generous personal donations to help restore the office wing and repurpose the space into an exhibit hall. Her husband’s fundraising efforts to create an exhibit hall in turn led to a $300,000 challenge grant from the Eddie and Joann Smith Foundation, putting the project well on its way to fruition.

“Once the foundation had the restoration money, Jerry led crucial meetings with the state, the construction company and its architect in designing and restoring the first floor of the wing and making a significant start on the second floor,” Roberts said. “But his involvement did not stop with the meetings.  He was on site again and again and again — making suggestions, and seeing that the construction met both his standards and those of the State Division of Historic Sites.”

To learn more about the Historic Bath Foundation, visit www.historicbath.com.

From Beaufort County Community College College is about the space between classes as much as it is the classes themselves.... read more