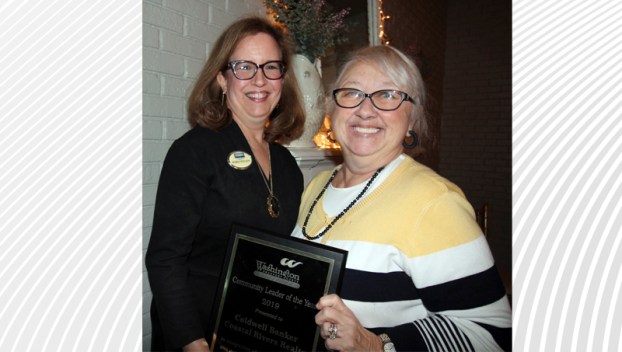 Coldwell Banker honored as 2019 Community Leader of the Year

A healthy real estate market is one of the best indicators of a strong local economy, and for 15 years, Coldwell Banker Coastal Rivers Realty has been an industry leader in Beaufort County.

For its impressive contributions to the local economy, coupled with a strong commitment to improving the community, the business was recognized Thursday as the Washington-Beaufort County Chamber of Commerce’s 2019 Community Leader of the Year.

The award was presented to Coldwell Banker Coastal Rivers Realty co-owners Gerri McKinley and Maria Wilson, who founded the Washington office together in 2005.

Since then, the business has prospered, growing from nine agents to 22 today and opening a second office in Pitt County in 2007.

“When we first opened, we were independent,” Wilson explained. “One reason we chose Coldwell Banker was that company was formed after the San Francisco earthquake and all the fires; they formed the company because there was so much dishonesty and they formed a company with a commitment to ethics in real estate.”

It’s that same commitment to ethics, and reputation for treating customers right, that has helped contribute to the firm’s success. In 2019 alone, the company closed more than 540 transactions and sold more than $91 million in real estate, not to mention its property management business. All of that business, in turn, uplifts a significant portion of the county’s economy.

“The real estate industry is 25% of the gross domestic product of this country,” McKinley said. “And we believe it, because we pull all the other industries with us — the appraisers, the inspectors, the repair people, the lenders, the lawyers — we pull a whole tide of industries behind us when we sell something.”

“Most of those things we do as a company, but that does not include all of the other things our brokers do individually,” Wilson said. “I’m so proud of all of them. They have pet projects that they do and they all have favorite charities. There are just so many things, in addition to what we sponsor as a company, that they do.”

McKinley and Wilson, likewise, exemplify that same spirit of service. Both serve on multiple volunteer boards and associations, believing in a responsibility to give back to the community.

“If you are part of the community, you know how much they give back of their time and talents to make Beaufort County a better place to live and work,” award presenter Sandra Warren succinctly summed up.

Born and raised in Beaufort County, both McKinley and Wilson want to make their hometown and home county a better place. But both say they couldn’t do it without the strong team of coworkers around them.

“It’s the company’s name on the plaque, and our company is every single person that works here,” Wilson said. “We truly do have a real estate family. Everyone helps each other, everyone laughs and everyone has a good time.”

“Its a family atmosphere,” McKinley added. “Everybody here really cares about the community.”

Understanding credit, borrowing money, paying for college, taking out a mortgage — these are skills that make up a major... read more