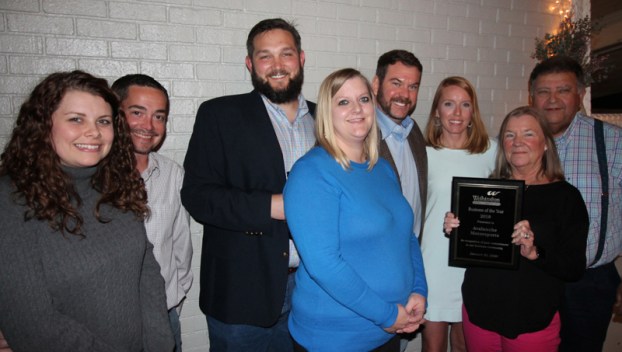 FAMILY BUSINESS: Recognized for its commitment to the business community, Avalanche Motorsports was named the 2019 Washington-Beaufort County Chamber of Commerce Business of the Year. Pictured (left to right) are Samantha and Alex Spain, Ross and Amber Mills, Todd and Lindsey Myers and Gwen and Bill Myers. (Matt Debnam/Daily News)

From their days of selling magazine subscriptions for fundraisers at Bath Elementary School, local business owners Todd and Austin Myers have always had a gift for sales. Together with their parents, Bill and Gwen Myers, the family has built up a successful business in Avalanche Motorsports, which was recognized last week as the Washington-Beaufort County Chamber of Commerce’s 2019 Business of the Year.

The same can be said for their business. The Myers family founded Avalanche in 2005, primarily focusing on the sale and service of ATVs and motorcycles. When the recession hit in 2008, the business was able to weather the storm by moving out to a location on U.S. Highway 264. In the end, Avalanche came out even stronger.

“About six or seven years ago, they had the opportunity to bring on a few boats,” Mills recalled. “There were six boats that were brought in, and Todd was scared to death about having six boats on the lot. Now, we have two dealerships and over 200 boats in stock.”

From its origins, Avalanche has grown and evolved over time. Today, boat sales and services make up the bulk of the company’s business. All told, Avalanche was the No. 1 dealer of Sea Fox Boats in the country last year and is on track to do the same in 2020. It’s also the second-largest seller of Carolina Skiff boats in the nation.

While that success has made for a thriving business, the company also brings in a wide variety of visitors from North Carolina and beyond to buy boats. Mills said out-of-town business gives the Avalanche team a chance to show off the community they love.

“We have a lot of people who come from out of town, and when they’re coming in, we’re telling them they need to spend the night in local hotels and sending them down to the waterfront area to go to dinner,” Mills said. “It’s nice to be able to bring people into our town from all over the country and show them a little piece of what Washington has.”

Just this past year, Avalanche has sold boats in several states and even a few foreign countries, including St. Martin, Switzerland and Saudi Arabia. Mills said the Florida and New York markets have also been good for the business. But no matter how far their boats may travel, their roots remain here in Beaufort County.

“We were completely and totally shocked,” Mills said of the award. “Seeing the growth in the community, it’s really special for us. We’ve had a lot of support from everybody. … We’re super-appreciative for the Chamber taking notice of what we’re doing. We’re honored.”

To learn more about Avalanche Motorsports, their inventory and the services they provide, visit www.avalanche-motors.com.

The beauty and grandeur of eastern North Carolina’s landscapes and wildlife can experienced in a whole new way this weekend,... read more