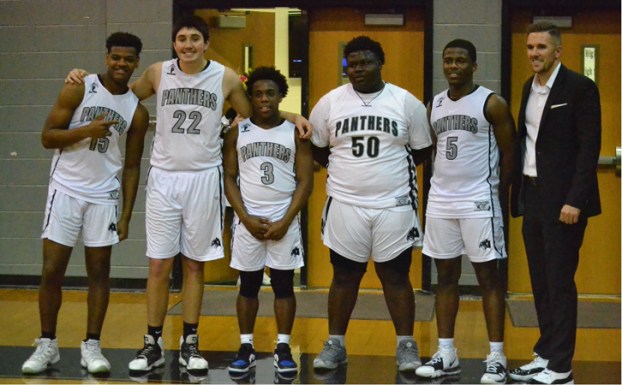 PINETOWN — The Northside High School seniors were sent off on a high-note after both the Panthers’ boys and girls teams came away victorious over South Creek on Senior Night Friday. After the game, the seniors talked about their favorite part of their four-year careers donning the black and white.

Senior guard Cameron Rose played basketball her freshman season before taking off her sophomore and junior year, but returned to the hardwood for her senior season. She played her last game in Panthers’ gymnasium on Friday night. 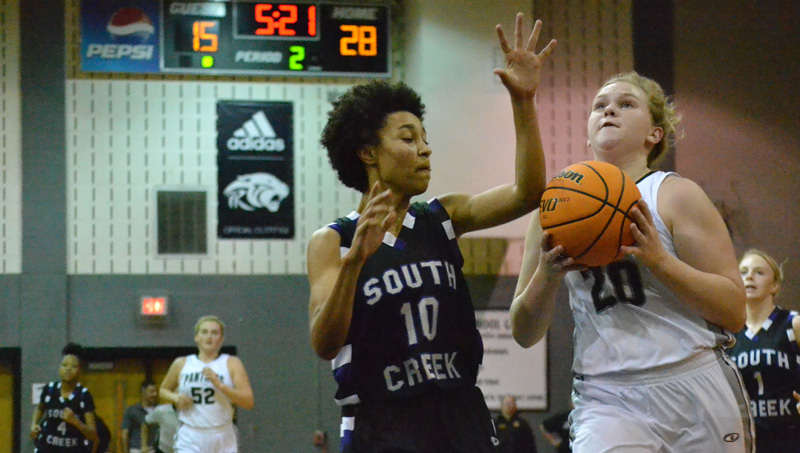 “It’s kind of sad,” The three-sport athlete, Rose said. “Coming back this year and regaining that family bond with the whole team was really cool. My favorite memory of playing basketball for Northside is during our last practice as a team. We just kind of come together as a team and goof off. We’re literally like a family all the time.”
Rose wasn’t the only one to say that the Panthers have a family atmosphere. When senior Ka’Nysha Satchel was asked what her favorite part of playing basketball for Northside was, she simply sat back and pointed at head coach Michelle Leathers.

“That’s my favorite coach ever right there,” Satchel said. “I’m not going to have her anymore after I leave here.”

Satchel plans to attend Pitt Community College before transferring to Campbell University. Her goal is to go to law school to become a lawyer.

Leathers said that this group of seniors was special.

“I have an excellent group of girls every year. I’m always blessed to have a great group of seniors,” Leathers said. “Prentiss Thomas really stepped her game up and ran point for us, Ve’Era (Holloway) always does what I ask of her, (Satchel) came off the bench, but she just loves being a part of the team. She’s like the mom of the group. (Rose) started her freshman year here, but took a couple years off. I was glad to have her back this year. And Alexia (Sommers) got hurt, but she came along and helped us a lot.”

Leathers will also be helping out with the Panthers’ track team this coming spring.

Senior guard for the Panthers boys’ squad, Omari Crandell, turned in a double-digit performance on Senior Night and spoke on his career.

“My four years here was great. I had a good time, met a lot of people and had a great high school experience,” Crandell said. “My favorite memory was definitely my junior year. I got to play with my best friend Rashod (Smith), and we just had a good time.”

“My favorite memory was that last game with Coach (Mike) Proctor before he passed away,” Turner said. “That was the last full house game that we had. It was packed. That was a really special moment that I remember, and then we got the patches for him.”

The Panthers have been wearing a patch that represents coach Proctor on their new jerseys’ right shoulder. They got the patches and new uniforms about two months after Proctor passed away, according to Crandell.

Northside head coach Jared Adams said that he’d been coaching this group of senior for a long time.

“A lot of these guys I coached in little league baseball. Coached a lot of them right on up through high school. I’ve been around them since they were all about 10 years old,” Adams said. “Obviously, nobody at this point in their senior year only wants to have won six ball games, but what better way to go out on Senior Night with a game like this. Everybody was scoring, everybody got involved and the ball movement was good. The bench and the crowd were into it. It was fun and exciting to watch. It brought the basketball atmosphere back to the team.”

Northside has a chance to salvage their season and get fourth-place in the conference if they win out, which could potentially mean a playoff spot. That’s Adams’ and the rest of the teams’ goal from this point forward. The Panthers travel to Tarboro this evening.

The Terra Ceia Knights continue to add to its trophy case with a decisive 51-33 win over Pungo Christian Academy... read more