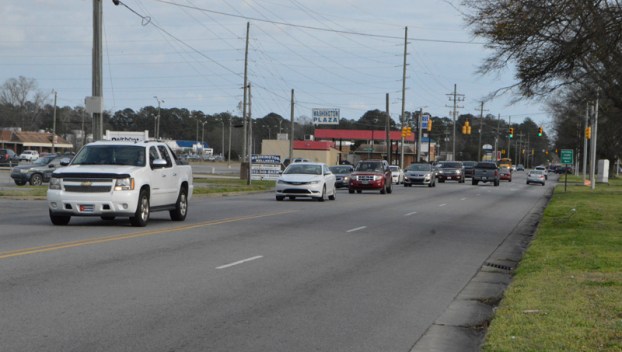 SAFETY CONCERNS: The Washington City Council voted unanimously Monday to seek out a transportation consultant to look at safety issues and possible improvements on 15th Street. A previous proposal from the NCDOT to make 15th a superstreet was voted down by a previous council in 2017. (Matt Debnam/Daily News)

Traffic safety problems, and possible solutions, on Washington’s 15th Street will receive a second look after the Washington City Council voted unanimously to seek an independent transportation consultant to look at the roadway’s issues from the city’s perspective.

City Council member Betsy Kane brought up the issue at the end of Monday’s meeting, after she and fellow council newcomer Donald Sadler were asked to look at the proposal set out by the NCDOT in 2016 to make West 15th a modified superstreet.

“15th Street can’t continue to be the road that it is,” Kane told the council. “Everyone knows that it’s dangerous, everyone avoids it, and if they have to go on it, they fear it. There has been a fatality there of a pedestrian, and there are many property-destroying and injury-producing crashes that occur out there.”

Kane emphasized that what the council decides to do with 15th Street will impact the city for decades to come, and may be the most important decision the current council will make during its term. She said she hopes a consultant would be able to act as an intermediary between the city and the NCDOT.

According to Washington City Manager Jonathan Russell, the ultimate goal is to reengage with NCDOT to revive the project in a new form. Russell says preliminary conversations with the DOT indicate that the state agency would be open to restarting negotiations on improving 15th Street.

“It’s still a project (NCDOT is) maintaining on their list of open projects,” Russell said. “There’s been some discussion about revisiting some of the layout and any ways we could potentially improve on it to resurrect that in some form or fashion.”

In essence, the move to hire a transportation consultant represents a shift from the proposal NCDOT offered in 2016. Under that plan, the street would have been reworked as a superstreet, a four-lane roadway divided by a raised median that would have allowed left turns and U-turns at median breaks throughout.

The proposal, which was funded by NCDOT to the tune of $16.2 million, also included infrastructure improvements that would have helped alleviate flooding issues in the northern part of the city.

When the proposal went public in 2016, however, it was met with criticism from 15th Street residents and business owners for a number of reasons. These included reduced access to businesses, property loss from roadway expansion and concerns about how the redesigned street would impact emergency services.

Kane says the DOT plan focused too much on making 15th Street a throughway through Washington, rather than a multimodal roadway to suit the needs of residents, businesses and pedestrians. She described the current road as “broken, dysfunctional and dangerous,” adding that the proposed design wouldn’t improve functionality for residents.

“It needs to be a solution that can work for us, not just the NCDOT,” she said.

Henry, Beezus, Ramona and Ribsy — if those names are familiar, a visit to a Turnage Theatre matinee should be... read more