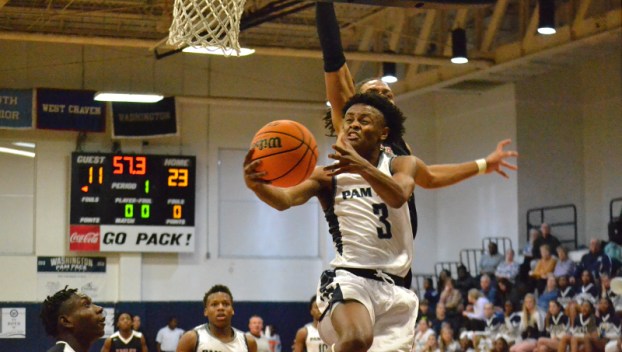 BRACING FOR CONTACT: Washington’s senior guard Rashod Smith goes up and under a West Craven defender for the basket during the Pam Pack’s 86-53 victory over the Eagles on Tuesday night. Smith went on to pick up 35 points in the contest including six 3-pointers. (Mitchell Thomas / Daily News)

A celebration of seniors was done right Tuesday evening at Washington High School. The girls and boys teams were sent off with a pair of wins, and senior guard Rashod Smith’s monstrous 35-point performance lit up the gym for the entirety of game, including two buzzer-beater 3-pointers before the end of the first and second quarters. The Pam Pack went on to win, 86-53.

It was a night to remember for Smith, as a couple of college representatives were in the building to watch him play Tuesday night. He knocked down six 3-pointers in the contest, dished out seven assists and grabbed six rebounds on the night to stuff the stat sheet.

“Man, my shot was on. I was in the gym getting up shots way before the game started tonight,” Smith said.

Smith was offered a scholarship to play basketball for Bluefield College in West Virginia on Tuesday night, which was his third offer in the past two weeks. William Peace University in downtown Raleigh, and Lenoir Community College also made offers to Smith.

“It’s very encouraging to get those; it’s a lot of weight off my back because my goal was to go to college for free,” Smith continued. “It’s a blessing for sure, I’m just glad to get the weight off.”

“This is why I came here,” Allewalt said. “This is why I left 1-A ball to come in here to play against Farmville, Kinston, Greene Central and Southwest (Edgecombe), so kids like him could get recognized. If anybody thinks this kid is doing things like stepping out of class or anything like that, they’re out of their minds. I haven’t seen anybody better. He’s so good, and he’s such a good kid. I even told my bench after he scored 26 points in the first half, ‘Do you know why that happened? Because good things happen to good people.’”

The Pam Pack scored 57 first half points, and had 80 points on the board before the end of the third quarter, but the running clock erased any ideas of Washington notching 100 points in the game.

Seniors Kash Godley, Justin Powell, Reese Gaskins and Smith will all graduate from Washington this year, but they may not have played their last game inside the Pam Pack’s gym just yet. 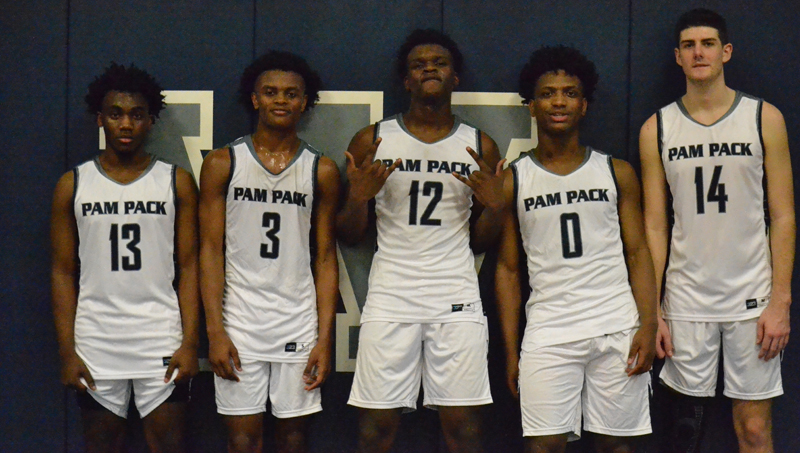 With the victory, they clinched second place in the 2-A Eastern Carolina Conference, regardless of Friday night’s outcome at Greene Central.

The top two teams in each conference usually host, and the latest projections from HighSchoolOT.com show the Pam Pack hosting Fairmont in the first round. However, they’re currently in the same bracket with Randleman, Goldsboro, Hertford County and Greene Central.

The Pam Pack will travel to Greene Central on Friday before the conference tournament begins next week. Tip off is set for 7:30 p.m.

Just a few of weeks ahead of the beginning of the 2020 high school softball season, Washington High School’s senior... read more