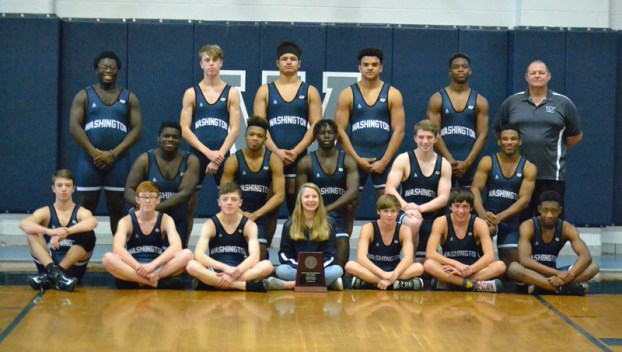 MAKING HISTORY: The Washington Pam Pack wrestling team posed for a photo with their Eastern Regional runner-ups plaque on Monday afternoon. It was the first time in Pam Pack school history they had made it to the eastern regional finals. (Mitchell Thomas / Daily News)

For the first time in school history, the Pam Pack’s wrestling team made it to the eastern regional finals. Despite the narrow loss to Croatan with a trip to the state finals on the line, the Pam Pack will gear up for individual duals this weekend at Croatan.

With the win, Washington advanced to the eastern regional finals, and fell short to Croatan, 37-28, despite leading for a good portion of the match.

Hartley won again, Sherfield Smith picked up a huge win in the 285-weight class; Isaac Campbell rebounded with a win, while Moore and Warren also won after a full six minutes.

Washington was forced to forfeit the 152-weight class that gave Croatan its first advantage, and they closed with two wins out of the last three matches to win. The Pam Pack trailed by six points heading into the last match and needed a pin to tie the score, but fell victim to a 4-2 decision.

Head coach Chris Penhollow said he’s proud of his team despite the loss, and looks forward to individual duals this weekend at Croatan.

“When I took this position six years ago, Washington wrestling hadn’t won a

Conference championship since I had graduated from here in 1986. The Pam Pack wrestling team had only made one appearance in the dual team playoffs, and lost in the first round that year,“ Penhollow said. “We have made great strides the past six seasons here, and I am tremendously proud of our kids, their dedication and the supportive parents that make sure that we never go without anything we need.”

Penhollow explained that it takes an entire community’s help to be successful in their wrestling program.

“The incredible dedication and hard work from all of the coaches are what make this program flourish and continue to grow each year. Thank you to Dan Koch, Telly Jones, Matt Berger, Austin Coward, Coach Peele, Brandon Leitz, Carl Perry, Tony Davis, Daniel Garcia and Justin Moore who have all helped at the high school level. Also, thanks to Greg Miller, Brett Campbell, John Crystal, Phil Harris, DK Credle, Austin Koonce and coach Slade for all of their help in the middle school program,” Penhollow continued. “There is no doubt that it takes an entire community full of love, desire, compassion and willingness to push and compete at a high level to achieve what the Pam Pack wrestling team has been doing.”

This weekend, Moore and Mykel Warren earned No. 1 seeds for their weight class in the eastern region. Nixon is a No. 2, Campbell and Hartley earned No. 4 seeds, Coward and Gerard will wrestle at No. 5, Zack Warren comes in as a No. 6, Whitney will be a No. 7, while Smith and Anderson will be 8-seeds for their respective weight classes.

The festivities begin tomorrow and will continue throughout the weekend.

A celebration of seniors was done right Tuesday evening at Washington High School. The girls and boys teams were sent... read more