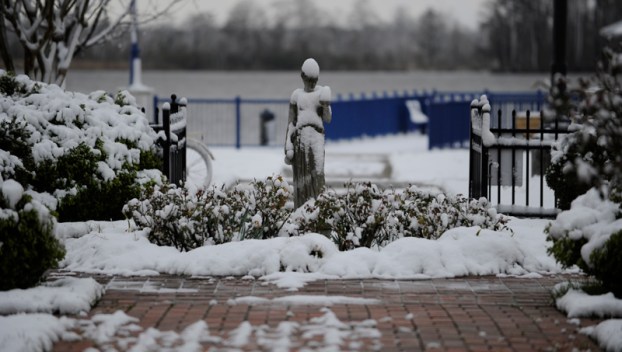 It’s been about two years since Beaufort County saw its last major snow event in 2018, and aside from a few lingering power outages Friday, the snowstorm Thursday and Friday left behind few problems countywide.

According to Ryan Ellis, a meteorologist with the National Weather Service’s Newport/Morehead City office, Beaufort County received an average of 3 1/2 inches of snow overnight, with some areas receiving more or less, depending on location. For example, some residents of Blounts Creek got about an inch, where others only got a light dusting.

“You guys had some of the higher totals up that way,” Ellis said. “Warm ground temperatures at the coast cut down on accumulation numbers. It snowed for 5-6 hours (here), and there’s really nothing to show for it on the ground.”

High winds and the accumulation of snow and ice on power lines left some customers in the dark early Friday morning, and outages persisted well into Friday afternoon in a number of locations. Tideland EMC crews worked throughout the day to repair a total of 16 broken poles, mostly in northeastern Beaufort County. Wind conditions slowed the work during the day, but Tideland estimated the repairs would be complete by 7 p.m. Friday.

According to Tideland, nearly 800 members lost power early Friday on the Pantego circuit, and crews were quickly dispatched to address the outage. Because the EMC was able to back feed power to some areas, that number was down to around 259 still without power as of 7 a.m. Friday.

Duke Energy Progress, meanwhile, showed eight customers without power between Chocowinity and Grimesland as of 12:30 p.m. Friday, all of which were restored that afternoon. Larger outages were reported to the south near Wilmar.

From a public safety perspective, there were no major incidents overnight related to the storm. According to North Carolina State Highway Patrol First Sgt. Gary Brown, local troopers responded to a few calls regarding cars sliding off the road, but none of those accidents produced injuries.

“We had maybe five calls at the most with a couple of cars in the ditch,” Brown said. “Nothing major. We didn’t have any injuries or any significant events. Power flickered on and off a couple of times, but other than that, we’ve been blessed with this storm.”

Although roads warmed up quickly Friday morning, Ellis said black ice is still something to watch out for over the weekend.

“Mid-morning (Saturday), it will be safely back up over freezing,” Ellis said. “But you could have that lingering black ice until Sunday. … Just a precaution to stay safe on the roadways, especially the overpasses and bridges — they might freeze a little bit quicker.”

While Aurora residents woke up to about 2-3 inches of snow Friday morning, Mayor Clif Williams said the storm did not present any major issues for the town, which was mostly business as usual Friday.

Overnight, Bath residents lost power from about 3:30 to 6:30 a.m., according to Bath Town Manager Bubs Carson, but that was the only real issue in town associated with the storm.

“It hasn’t been any trouble to us,” Carson said. “We had one fire call of a power line down, but before the guys could even respond, the power company had moved the lines.”

On par with other electric services, Belhaven Town Manager Lynn Davis said ice lingering on power lines Friday morning left a small outage for Belhaven utilities customers, but everything was back online by around noon Friday. All told, the town received between 2 and 4 inches of snow and reported no other issues.

In Chocowinity, likewise, Mayor Jimmy Mobley said there was little to report from the storm, aside from a cold day and rapidly melting snow Friday.

For some of Washington’s municipal staff, Thursday was a work night, as Washington Electric Utilities responded to isolated power outages and the Public Works department worked in conjunction with NCDOT to keep the roads clear.

“Public works staff came out about 7 to spread some salt in known problem areas,” City Manager Jonathan Russell said. “Then we started scraping secondary roads that DOT doesn’t cover around midnight. So they worked from about midnight to 5 a.m. … Power outages were limited. We had standby electric crews, and we had a few isolated incidents, but nothing major.”

The sun is out and the places where snow accumulated across the county is seeing a slow melt. But meteorologists... read more