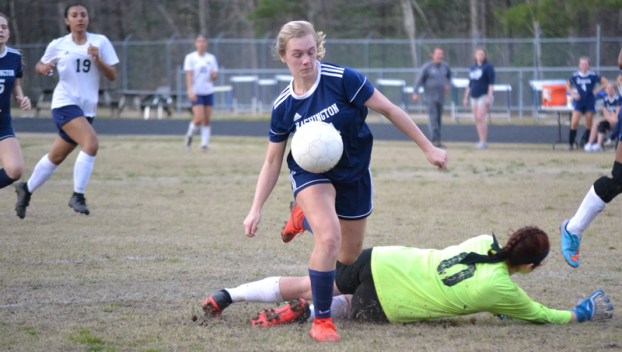 FANCY FOOTWORK: Washington’s Lilly Frances Lobos dekes the keeper and leaves her on the ground before burying the team’s fourth goal of the contest against Northside-Jacksonville on Wednesday. (Mitchell Thomas / Daily News)

A staunch defense and four goals were enough to overcome an early one-goal deficit, as the Pam Pack surged past the Lady Monarchs in the second half to win, 4-1.

Last week, the Lady Pam Pack traveled down to Jacksonville for the first of two games between the schools this season. The game ended in a 4-4 tie, but that was not the case Wednesday evening.

The Monarchs got on the board with an early goal from Madison Lumm who found a breakaway opportunity behind the Pam Pack’s defenders. From that point forward, it was all Washington.

The Pam Pack got the goal back as Lilly Frances Lobos crossed the ball across the face of the Monarch’s goalkeeper, and Rebecca Zerniak was there to finish the job for the equalizer. 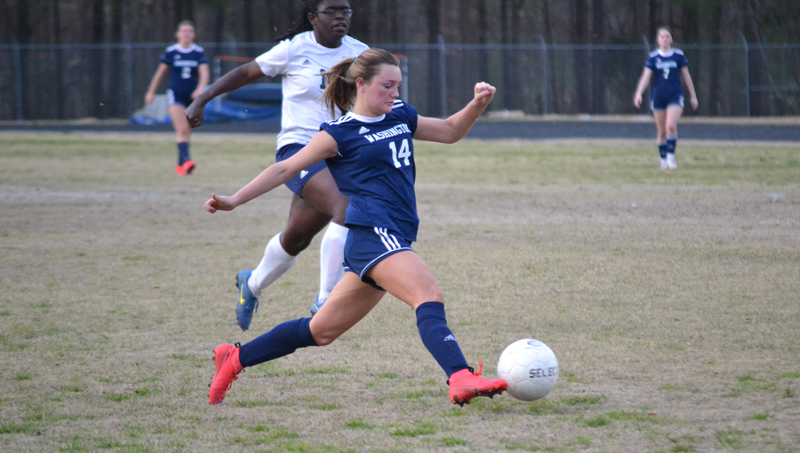 To begin the second half, Zerniak served up an assist to freshman forward Taylor Mitchell for the Pam Pack’s first lead.

To polish the game off, Lobos buried two goals in the back of the net. The final goal was off of a fancy deke that caused the goalkeeper to lose her footing, and Lobos tapped it home to cap the scoring.

“Talking (was the key to victory tonight). Telling each other when there’s a man on another, or putting our hand up when we’re open,” Zerniak said. “Defense was big. Last game our defense didn’t talk and we didn’t work as a team. This time, we definitely worked more as a team and it showed.”

Head coach of the Lady Pam Pack Edwin Rodriguez said that his team should’ve won the first meeting between the two schools.

“We should’ve never given up four goals against this team the first time,” Rodriguez said. “The biggest difference tonight was our defense. We took out a forward, and stuck a girl in the defensive mid-field. We could’ve had nine goals tonight. We have a lot of inexperience on the team, but I’m happy with the way we played. We have five new girls to our lineup and we’re starting two freshmen. We’re making a lot of progress, it was a lot better than it was at the beginning of the season.”

The Pam Pack will play host to South Central tonight, but amid the concerns of COVID-19 (coronavirus), there won’t be another soccer game until April 7 at Pasquotank County, if NCHSAA events return to schedule at the planned date of April 6.