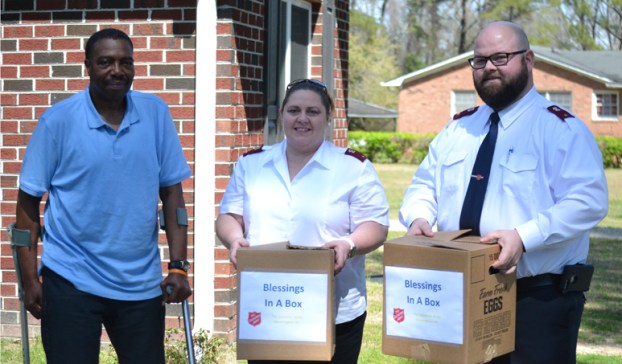 Salvation Army of Washington delivering “Blessings in a Box”

CHOCOWINITY — The Salvation Army of Washington has changed its method of delivering goods to its church families in response to COVID-19.

Normally, any families in need of goods would attend Salvation Army’s church in Washington, but Lieutenant Corps Officer for the Salvation Army Karl Bush said they’ve had to cancel church services due to CDC recommendations.

“Because of the whole six-foot rule and the rest of the guidelines from the CDC, like most churches, we’ve canceled services. We’re moving to an online live stream, but a lot of our congregation doesn’t have access to the internet. So, we’re delivering copies of the Bible-study material that we’re doing on Sundays,” Karl Bush said.

The “Blessings in a Box” being delivered contain a paper that has the praise and worship songs, the devotional for Sunday’s online service, a variety of art-like activities for children in the home and non-perishable food items.

Karl Bush and Lt. Teresa Bush moved to the area two years ago after completing their Salvation Army training known as a “session,” which lasted two years. After training was complete, they took charge of a Salvation Army unit.

The Bushes have 10 church families that they will deliver to, focusing mostly on the families that do not have internet access in their homes or who can’t follow along on the Facebook live stream.

“It’s a different situation we’re in, but we’re still doing our social services like rent and utility assistance; we’re giving out food and clothing vouchers still. It’s all of the normal stuff that we do, just being delivered a little differently,” Karl Bush said.

The Bushes made a delivery Wednesday afternoon to Harvey Dennis, a Corps Sergeant Major and Sunday school pastor for the adult group at the Salvation Army church in Washington.

“This here (Karl and Teresa Bush) is our pastor and first lady. Ever since they’ve been in Washington these past two years now, they’ve done some amazing things and have been a blessing to our community,” Dennis said. “I just wish them luck and pray they continue to bless this neighborhood. They’ve been a blessing to me ever since I’ve been here.”

A Corps Sergeant Major is essentially the “head deacon,” in a normal church setting, according to Karl Bush.

Karl and Teresa Bush will continue to make their rounds each week to prepare its congregation with the live stream messages they will be delivering each Sunday.