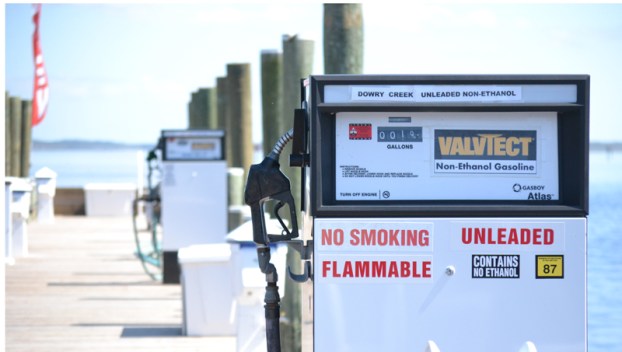 FILL UP: Gas pumps stand at the ready for boats looking to fill up their gas tanks along the waterways at Belhaven’s Dowry Creek Marina. (Mitchell Thomas / Daily News)

Though Washington’s waterfront docks and Dowry Creek Marina are open for dockage, boaters are staying aboard their vessels in response to COVID-19.

While operations are still up and running, and boat traffic is hovering around average, many people who have docked their boats are taking precautions by remaining on their boats, using their own bathrooms and showers, and only coming off to visit grocery stores, according to Steve Zeltner, the dockmaster at Dowry Creek Marina in Belhaven.

“We’ve had a lot of people call off their reservations. A lot of the boats are staying where they are. Boats really start moving around the third week of March, which is around this time. A lot of the boats here are just kind of anchoring out in the Pungo right now. Boats are not coming in unless they feel like they need to. The boats that are stopping, get all hooked up and folks stay right on the boat. They’re not using the facilities, they’re using their own restrooms, not using the clubhouse or the store unless they really need to, but we do shuttle folks to the grocery store. They’ll make their one trip to the grocery store and get right back on the boat, and that’s all we’ll see of them,” Zeltner said.

Zeltner said that typically out of 12 boats, eight to 10 of their occupants would dine out downtown. However, the restaurants’ closure has affected that type of traffic.

“We’re still able to fully function with all of our facilities because we’re not right in the center of the town or anything. We have distance, we have space, so it’s not an issue there,” Zeltner said. “By the second or third week of February, we saw a pretty drastic drop off of transient boats that were moving. I think a big part of that is they immediately started to shut down boat shows. More significantly for the marina, we’re still going to have that overnight stay. … There’s a lot of boaters that are south of us right now checking where they can stop and what they can do, but they should know all the marinas through the area along the waterway — for the most part —are open. We’re open in emergency situations, we’re open to provide fuel, if they need to get to a doctor or whatever, we’re not in New York or Charleston or a big harbor, and there’s not thousands of people around the boats.”

The Washington waterfront is still seeing traffic, despite most of the facilities and businesses nearby being closed, according to dockmaster Rick Brass.

“Because we’re a city facility, the bathrooms are closed, and we recently had the place fumigated. We sealed off every one of the rooms and completely disinfected everything. We’re trying hard to put Lysol spray on the door handles and things like that. Access to the office is restricted, like other city facilities, but we’re still there from 8 a.m. to, right now, 7 p.m. at night. We still have to help people get in and out, take care of business and look after people’s boats,” Brass said. “The weekend before last, we probably had around 20 boats come in for the weekend. We have one couple that’s been on the dock for several months, and they have elected not to leave yet. They planned on heading north, but there are a lot of marinas and locations that are closed up that way. So, they’re waiting for the whole (virus) situation to stabilize a little bit before they leave. The boat traffic has been average for this time of year, but we’ve been having a lot of foot traffic visiting the waterfront.”