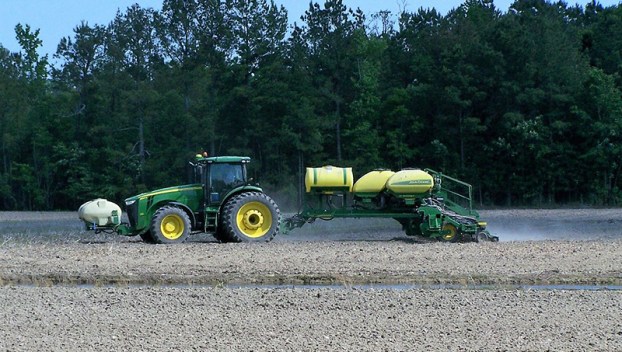 In recent months, COVID-19 has touched almost every facet of American life, and agriculture is no exception. For local farmers, falling commodity crop prices have been the biggest concern, according to Beaufort County Cooperative Extension Services Director Rod Gurganus.

“The impacts are in the prices, especially for the commodities that they’re growing, whether it’s animals or crops,” Gurganus said. “Those prices have taken a tremendous hit. One figure I saw was anywhere between 10% and 40% lower than what they were a few months ago, in some cases. We’ve definitely seen issues with prices. That’s affecting these guys because they’re having to make decisions based on the market.”

Speaking during a Zoom meeting hosted by Nutrien and the Washington-Beaufort County Chamber of Commerce on Tuesday, North Carolina Farm Bureau President Shawn Harding said the future of the economy remains uncertain, but that farmers are still pressing on.

“Our message has been that farmers are still farming,” Harding said. “A lot of people ask me, ‘What are farmers doing?’ I can tell you what they’re doing — they’re working. They’re going to work and planting, because Mother Nature doesn’t wait just because there’s a pandemic. The season is here, and it’s time to go. But that doesn’t mean that they’ve not been affected.”

While Beaufort County has relatively few livestock producers raising chickens and hogs compared to other areas, COVID-19 outbreaks at meat processing plants across the state have threatened to disrupt that supply chain. Coupled with a steep drop in demand from restaurants, livestock producers are faced with the tough decision of having to potentially euthanize animals.

“That is the last resort,” Harding said. “We’re going to do everything in our power at Farm Bureau, with the Department (of Agriculture and Consumer Science) to keep this food supply chain working.”

“We do have some hogs, and those guys are being impacted,” Gurganus said. “If their packing houses that they’re shipping to are closed down, then obviously that’s a problem. But I haven’t heard any of our guys in the county say that they’re having to euthanize animals yet. I’m assuming, at this point, they’re able to move their animals still, but the prices have fallen substantially, so that has an impact on their bottom line.”

In recent weeks, reports of farmers having to destroy produce and other goods have made headlines across the country. Because of plummeting demand in restaurants, many of those farms have had difficulty selling those crops. Rather than incur the cost of harvesting, it’s more economical to cut their losses, especially when another crop is coming up in a few weeks. Locally, Gurganus explained that commodity farmers don’t have to make those same kinds of decisions.

“Produce is a very perishable product,” Gurganus said. “It’s not going to hold long. You can’t put it in a grain bin like we can with corn and hold it for two or three years. You eat it or get rid of it. … We have a few acres of produce crops here, but we’re not nearly on the scale or schedule that they are down south. We’re still hoping that those guys will be able to harvest those crops and that there will be demand for them.”

In terms of relief for farms and agricultural businesses, the U.S. Small Business Administration has made Economic Injury Disaster Loans available for farmers. Additional resources are available at www.usda.gov, www.ncagr.gov and covid19.ces.ncsu.edu. The N.C. Department of Agriculture and Consumer Sciences has also established a COVID-19 Agriculture Assistance Hotline at 1-866-747-9823.

Throughout the entirety of this COVID-19 crisis, good deeds and kind gestures have been plentiful. Whether it was serving meals... read more