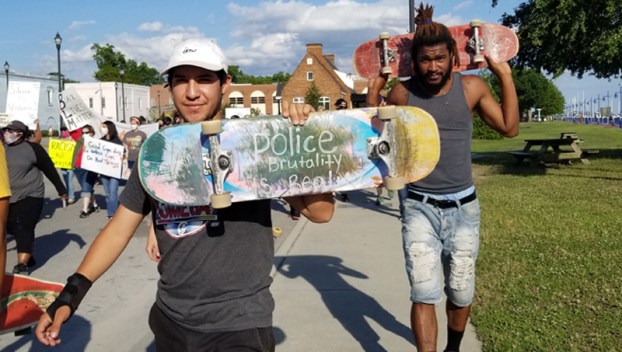 Washington does it right

An eerie calm sat over Washington on Monday afternoon. The atmosphere was permeated by a sense of uncertainty at what was to come as the 5:30 hour and a protest on the Washington waterfront approached. People wondered, “Will events in our town transpire as they did in Raleigh or Greenville?”

Ahead of the protest, downtown businesses were asked to close early so police could close streets. The City of Washington preemptively implemented an 8 p.m. curfew. Some business owners downtown, concerned their businesses might be targeted by the rioting that has plagued other cities, boarded up their windows and locked their doors. Local law enforcement stepped up their presence downtown, hoping for the best, but prepared for the worst.

Thankfully, the worst did not manifest itself in Washington on Monday night.

What happened instead was a group of protesters gathered at the Washington waterfront to peacefully demonstrate against police brutality. They protested in the name of black men and women like George Floyd and countless others who have lost their lives due to unjust actions by law enforcement officers.

As they marched along the waterfront, the Washington Police Department and Beaufort County Sheriff’s Office looked on. Sworn to protect the First Amendment rights of all Americans, they acted with professionalism and courtesy, even in the face of a protest criticizing the community they are a part of. They didn’t show up in riot gear, with batons in hand. Rather, they quietly upheld public order.

The protesters on the waterfront made that job easy. From the get-go, organizers made it very clear the demonstration was to remain peaceful, and they followed through to the very end. Rather than conflicts with the police and destruction of property, Monday’s rally ended with prayer and a push for voter registration.

A cursory look at American history tells us that the United States of America was founded on civil disobedience — just men challenging unjust laws and institutions. That notion was so important that the founders of the United States saw fit to enshrine the rights of free speech, free assembly and a free press in the Bill of Rights, not way down the list, but as the very first amendment to the U.S. Constitution.

Washington, and all of Beaufort County, should take pride in how events unfolded on the waterfront Monday afternoon. We should be glad to live in a place where citizens can make their voices heard, and where peace overcomes violence. Our hope is that this will be the start of a greater conversation in our community — one that begins to mend the deep wounds of racial injustice, distrust and anger. In continuing that conversation, our community can only become stronger than it already is.

While the nation’s eyes have turned to protests and riots across the country in the past week, many Americans still... read more