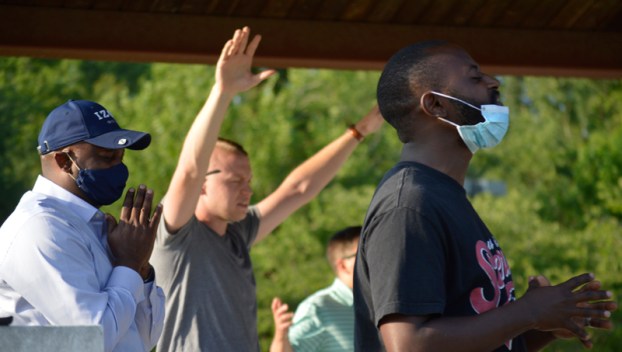 Local Christians unite in prayer for the world

A group of Christians gathered in a time of solemn prayer at Beebe Memorial Park on Monday, asking God to help heal a broken world.

The multiracial gathering, about 60 strong, brought together believers of various denominations, all praying for a wide variety of purposes under the common tagline of “praying for our community, our nation, united.”

During the course of the hour-long meeting, the group prayed for repentance, healing from COVID-19, justice and equality, first responders, government officials, children and youth, education and the church as a whole.

Pastors David Ward and Josh McIntyre organized the event. While the two both hold positions at local churches, McIntyre says the purpose of the prayer meeting was to bring people together not in any one particular building, but as the body of Christ.

“Our whole goal was to say, there’s no church affiliation, but we’re standing out here as a representation of the church,” McIntyre said. “We’re bringing our community of believers together to say there’s more than just us out here. We’ve got to pray for our community and our world.” 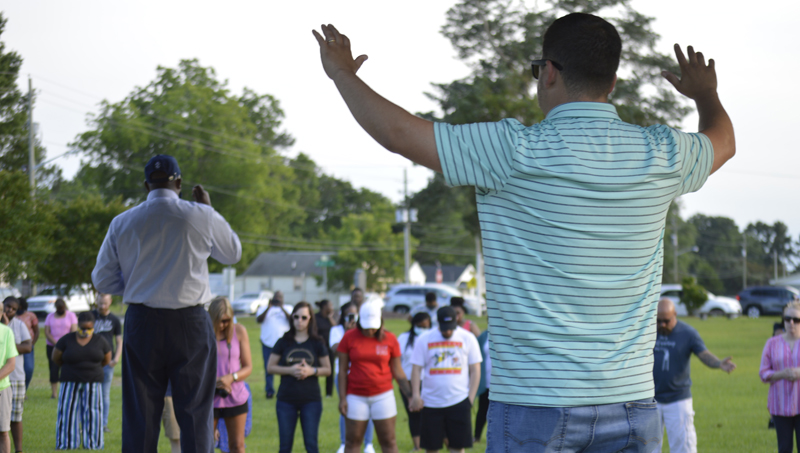 According to Ward, the idea for the meeting came about during the turbulent night of looting and rioting following protests in Greenville on May 31. Like many in Beaufort County, McIntyre and Ward heard those protests, and the unfortunate aftereffects, might be coming to Beaufort County.

“Immediately, my thought went to, ‘What can we do as a community?’” Ward said. “Josh and I have been in touch for years, and we get to do a lot of stuff together. Even before the protests began, in the midst of the Ahmaud Arbery case, we had already connected and had our youth groups connect and spend some time together to talk about racial reconciliation and what the word of God says about that.”

The meeting came at a time when deep divisions and a general state of unrest have arisen throughout the United States following the death of Minnesota resident George Floyd at the hands of a Minneapolis police officer. Set against the backdrop of a worldwide pandemic, recent weeks have seen widespread protests in cities across the country, as well as rioting and clashes between citizens and police officers.

According to organizers, the hope behind Monday’s meeting is that the country can find a better way forward, with God’s help. Ward said the choice of Beebe Memorial Park was an intentional decision.

“We could do something downtown, but if we’re being honest, in having conversations with Josh, I feel like it’s important that we go to a place where especially our black brothers and sisters can see us being united,” Ward said. “Doing it in a place like this, in a black community, hopefully people can see that we care, that we love them, that we want to join together with them and let them know that Jesus loves them.”

Another prayer meeting is being organized at Festival Park at 5:30 p.m. Wednesday afternoon. A video of Monday’s meeting can be viewed here.

Photographers to offer free photos for class of 2020

A group of local photographers will offer a special opportunity for the class of 2020 Thursday afternoon at the Washington... read more