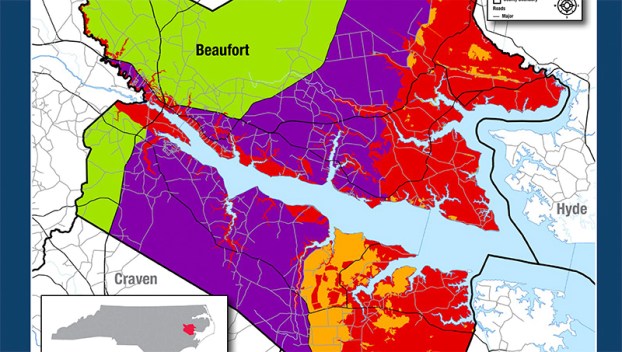 Know your zone. That’s what the North Carolina Department of Public Safety is urging all residents of 20 coastal North Carolina counties as hurricane season is now underway.

NCDPS Secretary Eric Hooks officially launched the program Thursday, along with its major tool, the Know Your Zone website.

“We want everyone in our coastal counties to know their zone,” Hooks said during a press conference.

At knowyourzone.nc.gov, users can find their zone by entering an address, as well as download a copy of the North Carolina Hurricane Guide, which contains advice ranging from what to do before a storm, dealing with aftermath and recovery resources and steps for individuals, businesses and farmers. The zones, themselves, are a way for local officials to identify areas most at risk to impacts from hurricanes, tropical storms and other hazards and streamline evacuations.

The idea was launched three years ago, after meteorologists from the National Hurricane Center, FEMA and the U.S. Army Corps of Engineers completed the Hurricane Evacuation Study. Teaming up with North Carolina Emergency Management and coastal counties’ emergency managers, the maps provided by the study have now been honed down to the county level, a tool Chris Newkirk, deputy director of Beaufort County Emergency Services, said will bring more clarity for county residents when the next hurricane is aiming for eastern North Carolina.

“For me, I think it definitely clarifies terms that we have used very loosely in the past. We’ve always identified evacuation zones as low-lying areas, and then the questions come: ‘Well, how do I know if I’m in a low-lying area?’ It puts lines on that. It’s really just defining a line on a map that people can understand,” Newkirk said.

The zones are classified by letter, with Zone A being the areas that are most vulnerable to storm surge or inland flooding. The majority of eastern Beaufort County falls into zones A and B; the majority of waterfront property along the county’s waterways also falls into Zone A. Each county’s emergency management department was given the option to localize the zones, incorporating past flood experience and/or basing evacuation zones on the logistics and timing of a mass evacuation, as would be the case for Outer Banks’ counties.

“One of the perks for our county, is we don’t have to worry about organizing evacuations,” Newkirk said. “We do look at the idea of saying, ‘OK, in Zone A we do have some areas that will be impacted.’ For us, we’re defining a hazard area. So, it’s unique to individual counties based on what they need.”

Newkirk said the maps are starting point: as more storms and seasons occur, he anticipates that there will be changes, but zones aren’t necessarily defined by whether or not a particular area is prone to flooding. The zones are also based on access to those areas — especially places where there is “one way in and one way out.”

Though some counties have increased their number of zones or adjusted the boundaries of zones as defined by the original study, Beaufort County emergency management was fresh from one of its most devastating hurricane experiences.

“When it came to us for review, that was after Florence. Everything that was in Zone A and in Zone B was a problem for us — it was on the map. So we used the recommended zones,” Newkirk said.

According to Katie Webster, North Carolina Emergency Management meteorologist and the lead on the Know Your Zone project, one of the major goals of the state website is to facilitate greater communication, for example, giving residents and visitors to coastal counties easy access to their location’s zone, then directing them to that county’s website and/or social media platforms for more specific direction.

“Historically, evacuations are left to the county level. In elevating this up to the state level, it is to promote what (each) county decides to do during a storm and direct them back to the county information … when you need to go, or more important, when it’s OK to stay,” Webster said during a webinar held Thursday afternoon.

Joining her on the webinar was Jamie Rhome, the National Hurricane Center’s storm surge specialist, who congratulated North Carolina Emergency Management for launching the project. He also said zoning the coastal counties made his job easier — as past storms have approached, county officials’ requests for storm-surge predictions meant seeking out flood maps and comparing them to a specific address. With zones mapped out for all 20 coastal counties, he said it streamlines the process of sharing information.

“For me, the scientist, to be able to communicate the risk is really helpful,” Rhome said.

According to Rhome, Know Your Zone is a progressive approach to emergency management, as a few changing factors are contributing to a greater risk of flooding events: the heavier rainfall associated with a warmer climate, some science suggesting a slowing trend in the forward speeds of hurricanes as they approach land and sea-level rise.

Many states scrambling to update hurricane plans for virus

By SETH BORENSTEIN AP Science Writer Officials across the U.S. South are still scrambling to adjust their hurricane plans to... read more