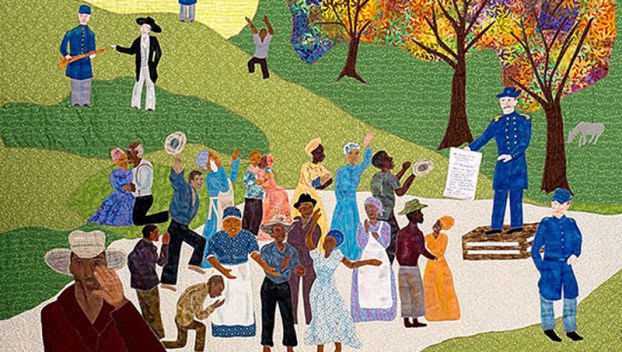 EMANCIPATION: A quilt hanging at the Bullock Museum in Austin, Texas, depicts Union General Gordon Granger announcing the emancipation of the last enslaved people in the United States of America on June 19, 1865. In the 155 years since, Juneteenth has marked a celebration of that freedom. (Bullock Museum/Quilt designed by Renee Allen)

Juneteenth walk to celebrate freedom, pray for the future

June 19, 1865 was a day that marked the end of a dark chapter in American history and the beginning of a new one. Two and a half years after Abraham Lincoln read the Emancipation Proclamation, Union troops freed the last enslaved people in Galveston, Texas, and slavery was officially ended in the United States.

Since then, June 19, known as Juneteenth, has been a day of celebration for many in the African American community. This Friday, 155 years later, that celebration will continue in Washington, as the Beaufort County NAACP hosts a community faith walk and prayer walk.

“There was a general who had to go and tell the people, ‘Let these people go free,’” said Rev. Aaron Lewis, president of the Beaufort County NAACP. “That’s why some people would say there are two independence days, there was the Fourth of July and then there was Juneteenth.”

Starting at Metropolitan AME Zion Church on West Martin Luther King Jr. Drive, the walk will proceed to Spring Garden Missionary Baptist Church on Gladden Street. The event is scheduled for 6 p.m. Friday. Refreshments will be provided at the end of the walk, and social distancing is encouraged.

Organizers invite the community to “join our local clergy, public officials, concerned citizens, families and friends as we walk in faith, sing and pray for our community, state, nation and world.”

For Lewis, the emphasis is on prayer — prayer for unity, awareness of the day, for those who have lost loved ones to injustice, for the children they leave behind and, finally, for political leaders from city hall to Congress.

NAACP 1st Vice President James Smallwood, who grew up in Beaufort County, says he never learned about Juneteenth until he was an adult. His niece told him about it after moving to Texas in the 1980s, where the holiday was regularly celebrated. Smallwood says learning about that holiday in turn lead him on a journey of learning about other events in American history during which African American communities were the targets of hatred.

“That’s when I found out about the burning of Tulsa, and I read and saw what happened at Rosewood and in Wilmington, ” Smallwood said. “I realized that it’s important that you understand these things that have happened, so they never happen again — so we can appreciate where we are now.”

For him, the holiday is not only a time to commemorate liberation from slavery, but an opportunity to learn from the past and acknowledge how far African Americans have come. Unlike the enslaved men and women of Texas in 1865, who had to be told they were free, Smallwood says that meaningful change can only come through actively seeking that knowledge.

“What we want people to learn from this Juneteenth is that we’ve had a great opportunity,” Smallwood said. “The opportunity for change is not going to come unless we do it ourselves. We can’t wait for somebody to inform us that the Civil War is over. We have to go out and do it ourselves.”

Circa-1816 Fowle House singled out for stewardship award

First, it was a home, then a Civil War hospital. At points, it was repurposed into a boys school and... read more