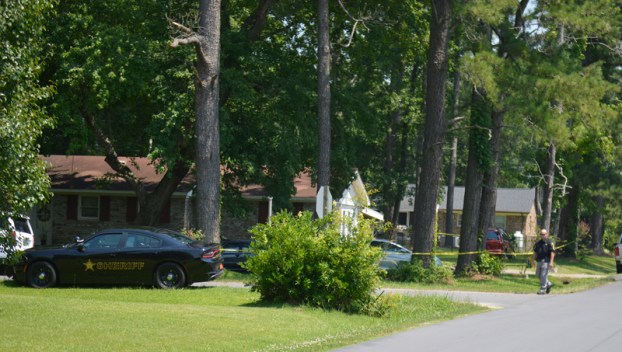 SHOOTING: Deputies responded to a home at the corner of Nottingham and Mansfield roads Monday morning to investigate reports of a shooting. (Matt Debnam/Daily News)

The Beaufort County Sheriff’s Office is seeking the public’s assistance as deputies continue investigating a shooting in the Sherwood Forest neighborhood, east of Washington.

BCSO Investigations Lt. Jim VanLandingham says the shooting happened around 10:45 a.m. Monday at 116 Mansfield Road. After entering the home, an intruder shot a 20-year-old resident in the leg after a confrontation, he said.

“I would assume that the person who entered the house did so in an attempt to steal something and was basically caught in the act of doing that,” VanLandingham said.

According to VanLandingham, no one else was at home when the break-in/shooting occurred. A BCSO press release says the suspect fled the residence on foot in an unknown direction.

After deputies responded to the scene, the victim was transported by EMS to Vidant Medical Center in Greenville. VanLandingham said the victim was stable and awaiting surgery at the hospital as of 5 p.m. Monday afternoon.

While no arrests had been made in the shooting as of Tuesday morning, the BCSO was able to interview the victim at the hospital Monday.

“He described the suspect as a black male, 6-foot-1, with short hair, wearing a black shirt with black pants,” VanLandingham said.

VanLandingham said BCSO deputies interviewed neighbors after the shooting, and were reviewing video footage of the area provided by residents. The BCSO is combing the neighborhood to try and find more information or video footage that could possibly lead to an arrest.

Anyone with information on the shooting is asked to contact the Beaufort County Sheriff’s Office at 252-946-7111.

The number of confirmed COVID-19 cases in North Carolina continued to rise from 52,801 Sunday to 53,964 Monday. There have... read more