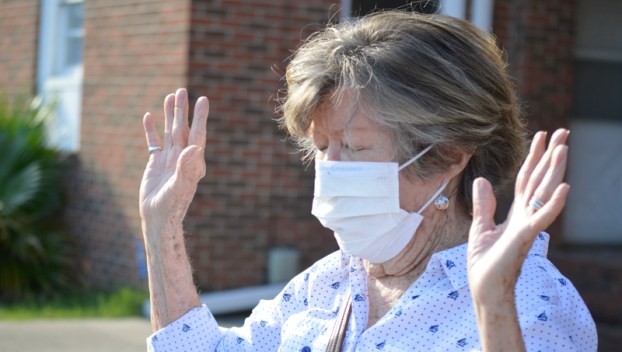 UNITED IN PRAYER: A participant in last week's Juneteenth walk lifts her hands in prayer. On Sunday, believers of all denominations will gather at the Beaufort County Courthouse for community worship, starting at 6 p.m. (Matt Debnam/Daily News)

Community worship to be held at courthouse Sunday

A community worship and prayer rally to be held in front of the Beaufort County Courthouse on Sunday seeks to bring believers of all denominations together, across barriers of race and skin color. Glenwood Horton, senior pastor at Kingdom Life Community Church in Washington, is organizing the event.

“We’ll be having a worship and prayer rally with pastors from all across Beaufort County,” Horton said. “We have approximately 50 to 60 pastors coming together. We have Black, white and Hispanic pastors from every denomination. We’re trying to break those denominational boundaries and show the people of Washington that we’re coming together in unity.”

The Sunday prayer rally will be the fourth such event in Washington in recent weeks. Each of those meetings had a common purpose of uniting local Christians in prayer for the community and the United States as a whole.

“Everything is so divided and so ugly, and I feel like we have to go back to the basics,” Horton said. “The basics are putting God first and having prayer. This world, and the nation, will not change until we all get on our knees and start going back to our first love, which is praying and trying to see Him.”

All three were well attended by people of various races and religious backgrounds, and Horton hopes to see that trend continue.

“It’s not about one particular church or one particular pastor,” Horton said. “We’re all trying to band together as one, and coming together as Christians shows the world that we’re never alone, because we have Christ on our side.”

The community worship and prayer meeting starts at 6 p.m. Sunday evening in front of the Beaufort County Courthouse, located at 112 W. Second St. in Washington. For more information, call 252-623-9386.

The Beaufort County Sheriff’s Office is seeking the public’s assistance as deputies continue investigating a shooting in the Sherwood Forest... read more