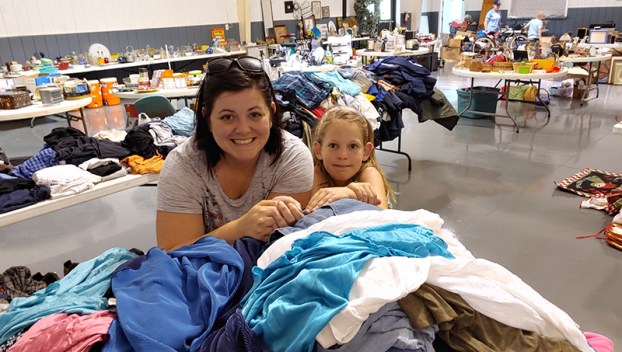 A HEART FOR HOME: Alexis Kelly and daughter Crizma look over the many goods that will be available at this weekend’s indoor yard sale at Washington Assembly of God’s Family Life Center. Proceeds will help purchase the land for a children’s home. (Karen Thiel)

Yet another brick has been added to the structure of love and outreach being built at Washington Assembly of God. The congregation will host what is being billed as the “biggest indoor yard sale you’ll ever experience” — all to raise funds for the purchase of property that will become the Kelly Children’s Home.

The event will coincide with the church’s “Food Truck Friday.” Doors to the church’s Family Life Center will be open from 6 p.m. to 8 p.m. Friday, as well as Saturday from 6:30 a.m. to 12:30 p.m. All proceeds from the yard sale will go toward the purchase of the old Second Baptist property at the corner of 10th and Nicholson streets.

The effort to build a children’s home is being spearheaded by Alexis Kelly, a Beaufort County native who recently returned to her roots with husband Josh, after several years in the Raleigh area. The children’s home was registered as a 501(c)3 nonprofit organization in 2016. Kelly, who is founder and CEO of the project, said she has been trying to raise funds since well before the COVID-19 pandemic hit but, like so many others in this season, has experienced the effects of pandemic related shortfalls among her potential donors and grantors.

According to Senior Pastor Daniel Haskett, the decision to partner with Kelly on the project is the result of getting to know the Kellys over the past year they have attended Washington Assembly, and seeing the practical ways their lives match the lifestyle of Jesus, in terms of selfless love and dedication to those around them who carry heavy burdens.

Kelly said the power behind her dedication exploded, in a good way, when she and her husband adopted their daughter, Crizma, in 2016 — three sons round out the family table.

“She was one of hundreds of children available for immediate adoption in North Carolina, which means that the parents of these children had either lost or relinquished their parental rights. These innocent kids were now just in limbo, just waiting to be adopted into their forever family,” Kelly said.

Kelly said her resolve to help these children is strengthened by “learning that there were hundreds of children like Crizma in Beaufort County alone, all of whom are separated from their siblings thru foster care. And most people only want to foster or adopt a small child,” she said. “We strongly feel the need to break destructive cycle in eastern North Carolina, and not repeat the drug epidemic abuse and criminal activity that we have here… which means fostering the forgotten teens who so desperately need the love and support of an emotionally healthy family.” Kelly noted that her knowledge comes from having spent all but 10 of her 33 years in Beaufort County, and “not just from our research about the extent of opioid addiction and domestic violence and domestic abuse here.”

The birth of her fourth child delayed the project a bit, but Kelly said, for the past year, she and her husband have been “working to identify the need in Beaufort County and search for a site.  We actually put in an offer on the old Hotel Louise, which has been vacant for so long, but the seller decided to turn it into downtown apartments. There was a reason for that, though, because God has provided the perfect property at 300 East 10th Street.”

Kelly said the goal for the first year is to house 20 children and increase from there. According to her GoFundMe page, the building could eventually hold 30 to 40 children and staff.

So far, Kelly and a host of donors have raised about $53,000 of the $130,000 needed to completely pay for the property in July. She said their commitment is so strong that, if the full amount isn’t raised on time, she and her husband “will take out a personal loan … and we are not taking salaries, so this is really and truly a nonprofit venture in the monetary sense … but priceless when you think about the lives that can be saved.”

According to Haskett, Washington Assembly’s commitment to support the Kelly’s vision is part of how the church defines itself.

“Their hearts and goals fit in with our mission, to fill the city with Jesus. And our vision, how we implement that mission, will include partnering with them and the children’s home. The foster care statistics in this part of North Carolina are staggering,” Haskett said. “Especially in terms of abandonment, substance abuse and human trafficking. This home will supply safety, protection and Godly vales that will prevent much of the damage that these children could face down the road.”