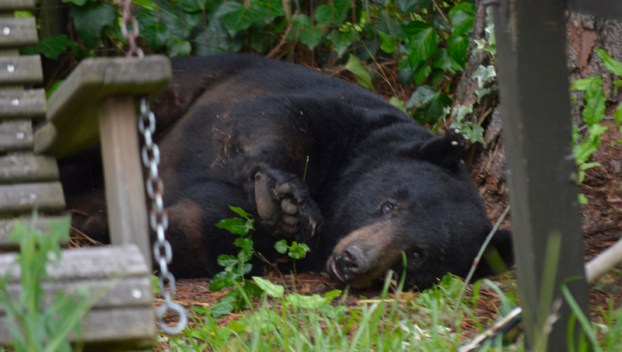 SHOT AND KILLED: North Carolina Wildlife Resources Commission officials and the Washington Police Department are seeking information on the person who shot and killed a black bear in a Van Norden Street neighborhood Thursday. The NCWRC is offering an award of up to $1,000 for information leading to an arrest and conviction. (Matt Debnam/Daily News)

The North Carolina Wildlife Resources Commission and the Washington Police Department are looking for the person responsible for shooting and killing a black bear that wandered onto Van Norden Street on Thursday.

According to NCWRC Sgt. William Cain, the WPD began receiving calls about the bear in the neighborhood around 6 a.m. Thursday morning. The animal’s presence drew a crowd of people, many of whom took photos and videos of the creature. Early in the afternoon, the bear climbed a tree, and law enforcement left around 2 p.m.

“At that point there was really no danger to anybody,” Cain said. “He was up a tree and was going to stay there until after dark. We made the decision to leave and just ride by periodically and make sure he was okay, both my officers and the Washington Police Department.”

As a matter of policy, the NCWRC does not remove and relocate wild animals. Cain said the reason behind that policy is that relocated animals, especially bears, can become a nuisance in the areas they are released.

When law enforcement left, Cain said the crowds continued to gather, discouraging the bear from leaving the area. Around 5 p.m., the Washington Police Department contacted wildlife officers and let them know that someone had shot and killed the bear.

Coming back to investigate, officers found six 9mm shell casings near where the bear lay dead. So far, Cain says his agency has no leads on who may have killed the bear, but the person responsible could face charges from both N.C. Wildlife and the WPD.

From the wildlife side, Cain says the shooter could be charged with taking a black bear during closed season, a class 1 misdemeanor that carries a fines and court costs totaling more than $4,400. Washington Police and Fire Services Director Stacy Drakeford says the WPD will charge the person with discharging a firearm in the city limits, also a misdemeanor.

Weighed after its death, the male bear came in at 403 pounds, but Cain says it posed no danger to the public. He said that had the animal been left alone, it probably would have left town after sunset.

“This is a male bear, and this is normally the time of year we have bears come into Washington,” Cain said Thursday, before the bear died. “There’s two things happening now. The sows are running the yearling bears away and most of the time that’s what we deal with. This is a bull bear, so he’s been out roaming around, looking for a mate.”

NCWRC officer Amanda Nelson added that it was also trash collection day in the neighborhood on Thursday, and that the bear could have wandered into the area in search of an easy meal.

Anyone who can help identify the person who shot the bear can call N.C. Wildlife at 1-800-622-7137, or visit www.ncwildlife.org/wildtip. Information leading to an arrest could net the caller a reward of up to $1,000.