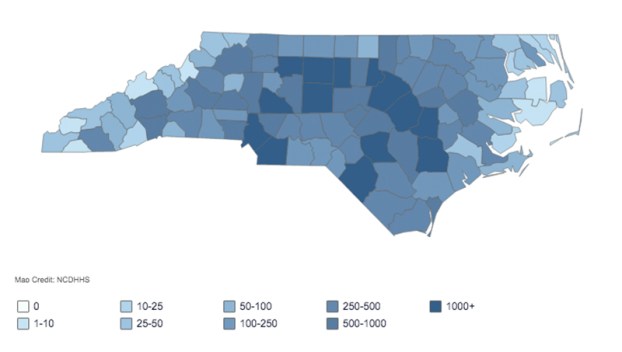 The number of confirmed COVID-19 cases in North Carolina continued to rise from 62,248 Sunday to 63,736 Monday. There have been 1,357 deaths in the state attributed to the virus, an increase of five overnight. The state currently has 843 COVID-19 associated hospitalizations and 45,538 people are presumed recovered from the virus in North Carolina.

On Friday, Beaufort County Health Department reported its first death in the county of a resident who tested positive for COVID-19. The person, who was the 56th confirmed case in the county, died last Wednesday.

Twenty-four of Beaufort County’s positive cases were asymptomatic, meaning they experienced no symptoms.

“Our four most recent cases have been attributed to having had direct contact with other known cases. All four were symptomatic,” the update reads.

Of Beaufort County’s total of 82 cases, contact tracing of these known, confirmed cases has concluded:

There had been 2,154 tests completed in Beaufort County as of Monday, with 1,885 negatives, 74 positives and 195 pending. These are cumulative numbers and include tests performed at the health department and reporting private medical facilities through the county. Eight of Beaufort County’s cases were tested in other counties but are Beaufort County residents.

Shelters make most of COVID challenges

By KAREN THIEL  For the Washington Daily News The contrasts couldn’t be more stark. Faced with the challenges of the... read more