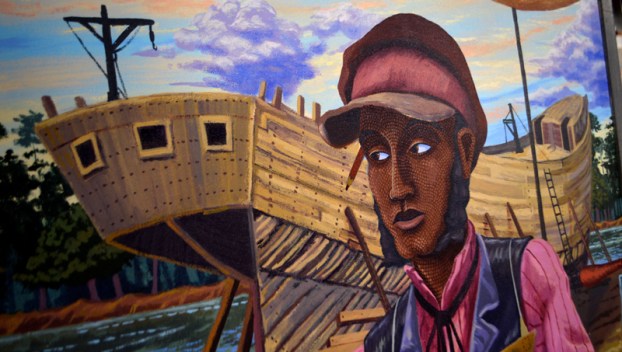 LOCAL LEGEND: Hull Anderson, who acquired his shipbuilding skills as a slave, built a thriving shipyard in the early 1800s, just west of Bridge Street. He and his family immigrated to Liberia in 1841, amidst rising distrust of free Black people and the passage of restrictive laws limiting their freedoms in North Carolina. (Matt Debnam/Daily News)

From the high-end boat manufacturers of today to the shipyards of centuries past, Beaufort County has long held a reputation as a boatbuilding hub in eastern North Carolina. Perhaps one of the most interesting stories in that long tradition is that of Hull Anderson, an African-American freedman who used the shipbuilding skills he learned in slavery to build a thriving shipyard on the Pamlico River in the early 19th century.

Now, patrons of the Washington Waterfront Underground Railroad Museum can finally put a face to that storied name, thanks to a new original painting recently donated to the museum by Ayden artist Mark Brown. A native of eastern North Carolina, Brown first learned about Anderson’s story while researching his own family’s genealogy in the history room at Brown Library. 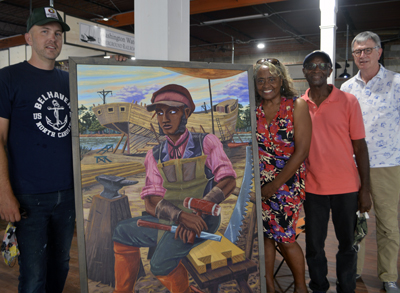 “I had known living in New Bern a while back, I knew that there was a large free black population there,” Brown said. “I mentioned it to the librarian and she said, ‘Well, there was also one here.’ (Anderson) was like the top of the barrel as far as names go, in regards to notables.”

Anderson is not the first “notable” to be brought to life by Brown’s brushes, however. Drawing inspiration from eastern North Carolina history and lore, he has painted a number of other semi-legendary figures from the region’s past.

“I’ve done Henry Berry Lowry, and a couple other known/unknown figures,” Brown said. “Henry Lowry was a Lumbee leader of a gang who ran hell against the Confederates during the Civil War. In Roberson County, almost everybody’s related to the guy.”

While figures like Lowry were photographed or painted before, Brown didn’t have any historical images of the Washington shipbuilder to work from. Using a catalogue of period costumes, Brown dressed Anderson in garb befitting a middle-class 19th-century craftsman, complete with a leather apron and the tools he might have used.

The painting itself, done in acrylic, catches the eye with bright colors and a technique that has become a signature one of Brown’s work. From his face to his hands, Anderson’s skin is painted in a mosaic-like style, a practice Brown picked up while living in Ravenna, Italy.

“It’s the mosaic capital of Europe,” Brown said. “The art scene there is contemporary mosaics. I didn’t have time to learn mosaic at the time, so I decided to make paintings that are mosaic-like, and they kind of took off and became their own thing. It’s about making monumental things. … It just kind of makes it a little more precious.” 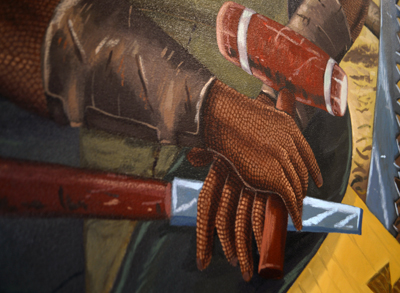 SOMETHING PRECIOUS: Portions of Mark Brown’s acrylic painting of Hull Anderson incorporate a mosaic-like style, a technique the artist picked up while living in Ravenna, Italy, the mosaic capital of Europe. (Matt Debnam/Daily News)

For the museum, and its partners at the Historic Port of Washington, having the painting to help tell Anderson’s story is indeed a precious gift, according to museum founder Leesa Jones. While the caboose that houses the museum on the corner of Main and Gladden streets is too small to display the painting, the two organizations are working on a solution to hang the portrait somewhere at the Harbor District Market.

“We want to tell the same story about Hull Anderson, because we work together on so many things,” Jones said. “We’re trying to figure out where we can put it that will really showcase the artwork he did, because it’s really a beautiful painting and (Brown) wants to help us tell that story.”

By KAREN THIEL For the Washington Daily News   They were the stuff of legend — the people and the... read more