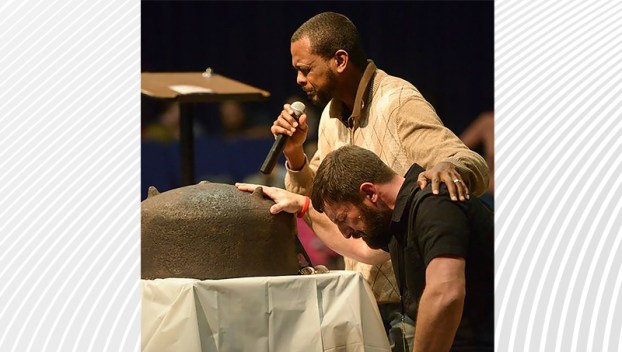 PRAYING TOGETHER: Will Ford (left) and Matt Lockett (right) pray over a cast-iron kettle that, during slavery in America, was used by Ford’s ancestors. It muffled their prayers so that their Caucasian masters, who were Lockett’s ancestors, would not punish them for their faith. (Dream Stream Company)

A local event about nationwide racial reconciliation — “A United Church for a Divided Nation” — will be held on July 31 and Aug. 1 at Harvest Church. Its two speakers are an African-American descendant of slaves and a Caucasian descendant of the family that owned those slaves.

For years before they met, Will Ford and Matt Lockett each believed in the necessity of change and the potential for hope in racially divided American society. They found common ground in their dedication to reconciliation and racial healing during a 2005 prayer march that ended at the Lincoln Memorial, the location where, in 1963, Dr. Martin Luther King Jr. gave his “I Have A Dream” speech. The pair has worked together toward those goals ever since. But it wasn’t until 10 years into their mutual efforts they discovered the historical connections that further united their hearts and energized their mutual mission.

The local event is co-hosted by Antwan Horton, pastor of Kingdom Life Community Church and Tad Tankard, who is senior pastor of Harvest Church. Both churches are located in Washington.

Horton said he and Tankard, who have shared a mentoring relationship for the last five years, share the same longing for reconciliation as Ford and Lockett.

“We are also two individuals who love Jesus, who come from two different backgrounds, who are yet together as one, like they are, in unity through love, forgiveness and reconciliation,” Horton said.

Tankard added that, other than their mutual love for Jesus, the strength of their friendship is that neither rejects their differences in the way that Satan does.

“The devil is the ultimate racist. He hates the entire human race. Right now, it’s all about tearing things down, burning things up, lawlessness. God is waiting on us. If we don’t change hearts with God’s love, nothing else will change. That’s the message of reconciliation, because racism isn’t a skin issue. It’s a sin issue. And a love issue,” Tankard said.

Ford and Lockett’s visit to eastern North Carolina will include a huge cast iron kettle which was passed down through Ford’s family, an artifact from the slavery of his ancestors. Besides food preparation, the kettle was used to muffle the whispered prayers of his enslaved ancestors, who would have paid dearly if their masters had heard them praying for freedom. Further adding to the men’s historical connection, Lockett discovered that it was his ancestors who owned members of Ford’s family, and that another of his ancestors owned the house near Sailor’s Creek in Virginia where Civil War general Robert E. Lee fought — and lost — his last battle in 1865. Lee surrendered three days later at nearby Appomattox Court House.

“Slavery ended in my family’s front yard,” Lockett said in a recent interview. “I’ve visited there, and the house is still riddled with bullet holes. Each of us having these artifacts were not coincidences.”

He formed Dream Stream Company in 2018 after he and Ford decided that they “have a story to tell — one that only God could write.” The men have been sharing that story ever since, as well as continuing their individual jobs and callings.

Ford is a professor at Christ for the Nations Institute in Dallas, Texas, serving there as director of the marketplace leadership major. A recipient of the “Mantle of Destiny Award” from the King Family Legacy Foundation, he is also the founder of Hilkiah Ministries.

Lockett has been executive Director at the Justice House of Prayer since 2005, the year he met Ford. The outreach is located a few blocks from the U.S. Capitol and Supreme Court. According to its Facebook page, JHOP DC is “committed to night and day prayer for government and the release of justice” in America.

Horton and Tankard said the gatherings on July 31 and Aug. 1 is important not only for Washington residents, but for the residents in all of eastern North Carolina, and beyond.

The meetings will be held at 7 p.m. July 31 and 10 a.m. Aug. 1. Because of the COVID-19 pandemic and related concern about public gatherings, the services will also be livestreamed on the Harvest Church web site, www.harvestchurchnc.com. The event is free and open to the public, and a free-will love offering will be taken for the speakers.

An order from the executive director of the North Carolina State Board of Elections has laid out new ground rules... read more