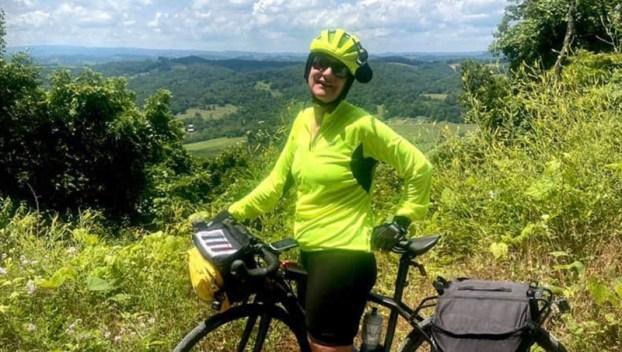 MOUNTAIN VIEW: A scenic photo shows Treva Inzerillo at the top of a long, gravel-filled mountain road. Inzerillo is cycling solo across the United States, a lifelong dream combined with a fundraiser for Pamlico Rose Institute for Sustainable Communities. (Treva Inzerillo)

An epic solo cross-country bicycle trip is halfway over — and already overflowing with amazing stories from the road — as Beaufort County resident Treva Inzerillo fulfills a dream she’s had since she was a teen.

The cyclist arrived in Kansas City on Wednesday night.

“Right now she’s on the Lewis and Clark Trail that goes from Missouri to the coast,” said her husband John Inzerillo, who is medical director of oncology at the Marion L. Shepard Cancer Center in Washington, and who will tell anyone how proud he is that his wife is fulfilling a lifelong goal.

“She’s strong and brave. She’s pushing her limits,” Inzerillo said of his wife, adding that compassion and generosity have also played a large part in her decision to take this ride. “This is not only for herself, as a lifelong dream, but to raise awareness and money for Pamlico Rose.” The Washington-based Pamlico Rose Institute for Sustainable Communities serves veterans who may be struggling with the effects of their military service.

John Inzerillo said his wife has been receiving donations for the cause from folks she has met on the road during this trip, as well as personal friends who are keeping track of her travels.

The cyclist has a long history with two-wheeled propulsion.

“When she was 19 years old, she read a book about a woman who crossed the country, and told me she always wanted to do that,” Inzerillo said about his wife of more than 20 years. He said she has ridden everything from “traditional” bicycles to motorcycles, on rides from short hops to 150-mile competitions, once completing an “MS150” race when she was pregnant with one of their now-adult children.

Inzerillo said his wife’s plan for this trip is to ride from the Atlantic to the Pacific and live each day just doing it—just to say she did it.

“She began the trip in June, with her back tire resting in the Atlantic Ocean at Pine Knoll Shores, and plans to end it in Oregon, where she will put her tire into the Pacific Ocean, then pack up her bike and fly home,” he said.

According to her husband, and several of her Facebook posts, Inzerillo has met a lot of nice people, who have welcomed her along the way.

“They show her around, buy her lunch and, once, literally watered her down at her request, on a day that was 90-plus degrees, and she was sweating bullets,” he said.

One couple, also cyclists, intersected with her and discovered that one of their sisters is also named Treva. At the top of one treacherous, gravel-covered mountain ascent, Inzerillo got her photo taken overlooking dramatic scenery by “a set of kindly hippies from Michigan who stopped to offer congratulations” for making it up the mountainside in two hours.

Via Facebook she teased her husband about making it to Sturgis with her bicycle before he and his Harley did — knowing all the while that she was in Sturgis, Kentucky, rather than the tiny town of Sturgis in South Dakota, where thousands of motorcyclists converge every year. Her travels have been included on two television news casts and a podcast has been devoted to her experiences on the Paper Bag Philosopher site.

Inzerillo said his wife still has a long ride ahead of her, adding that he has more admiration than he can describe about the determination it takes to dig down deep and then plan, train for and do a trip of this magnitude.

“It’s almost like the Olympics, but on a personal scale. She’s on a great adventure, definitely making the most of it, and showing followers of her journey that there are still a lot of nice people in America,” John Inzerillo said.

Those who wish to donate to Treva Inzerillo’s fundraiser can do so at Pamlico Rose’s website at pamlicorose.org or send a check to the group’s address, P.O. Box 264, Washington, NC 27889.

By KAREN THIEL For the Washington Daily News Bishop Samuel Jones Jr. and Purpose of God Annex Board of Directors... read more