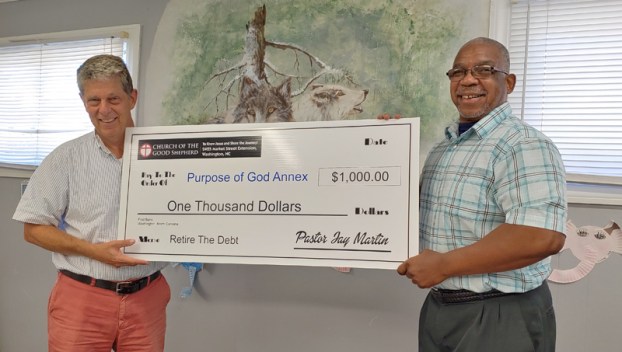 A GOOD START: Board Chairman Jay Martin (left) and Bishop Samuel Jones Jr. (right) hold a representation of the $1,000 donation just received from Church of the Good Shepherd, where Martin is pastor. It is the first of what leaders at Purpose of God Annex are hoping will be many that will pay off $38,000 still due on the ministry property’s mortgage. (Karen Thiel)

Bishop Samuel Jones Jr. and Purpose of God Annex Board of Directors Chairman Jay Martin enjoyed a walk down memory lane this week, leafing through page after page of photos and newspaper clippings lovingly preserved in a huge album, before announcing a new fundraising effort has begun for the ministry on Sixth Street.

“This ministry started out with no shoestrings and no budget. We have gone from scraps and change to something of substance. We started with $2,700 from out of our own pockets, which was all we had,” Jones said of himself and his wife, Mother Regina Jones, who serves as chief administrative officer for the outreach, which celebrated its 20th anniversary last year.

Jones said this season of pandemic-related adjustment has been challenging, but not much more than other mountains the group has had to climb over the last two decades.

“We have maintained and thrived with the help of big-hearted people who are seeing the fruits of this ministry and believing in us for that and more,” Jones said.

As part of the group’s plan to continue the new fundraising effort — “Retire The Debt” — was announced this week. The program is designed to make up for contributions that were lost when the ministry’s board of directors decided to cancel the annual dinner that, historically, has been their largest source of financial support. Jones said “tens of thousands of dollars” have been raised by donors who attended that event in recent years.

“We’ve come a long way from $5,000,” Jones said of the amount raised at the ministry’s first banquet.

Funds collected through “Retire the Debt” will be used to pay down the mortgage on the Sixth Street facility.

He said he is hoping that the “big-hearted people” already loyal to the outreach, along with area churches and community agencies, will follow the lead of Church of the Good Shepherd, which recently sent Jones a $1,000 check to light the fires of generosity among the ministry’s friends.

“I am taking that big check to worship this Sunday and offer a challenge to our folks to ‘throw in’ and see if we can match it from individual member contributions,” Martin said, referring to a giant cardboard representation of his church’s donation.

Martin, who has been a board member for 17 years, is also pastor of Church of the Good Shepherd.

According to its mission statement, Purpose of God Annex provides “human services for children and families in disadvantaged situation who are seeking to become socially and financially stable” through the programs and services offered at the outreach. Those include continuing education for high school drop-outs, job placement services, an after-school program for students from 6 to 16 years old (which re-opened in June) and a “refuge and intervention program” for former convicted felons and other adults at risk of harm and increased lifestyle damage due to criminal activity.

Martin said he has continued to help over the years because Purpose of God is a haven for at-risk kids and adults who, without the help they get here, could easily end up in jail or return there. Martin said his dedication is echoed by the involvement of other well-known and community-minded board members including Beaufort County Sheriff Ernie Coleman, Washington Police Chief Stacy Drakeford, District Attorney Seth Edwards, area judges and other community leaders who are “huge fans … and lean on Purpose of God and Bishop Jones for advice and wisdom in handling the loads they carry.”

“I want to be part of what the Lord is doing to make this community better. Lives are impacted here by caring individuals who provide a healthy framework for success … and I want to be one of them,” Martin said.

Purpose of God Annex is located at 1015 E. Sixth St. in Washington. Those interested in donating — or receiving assistance from the outreach — may contact POG on line at pogannex.com or by calling the facility at 252-974-1484.

Beaufort County had a total of 263 confirmed cases as of Friday, an increase of 14 overnight. Eight people are... read more