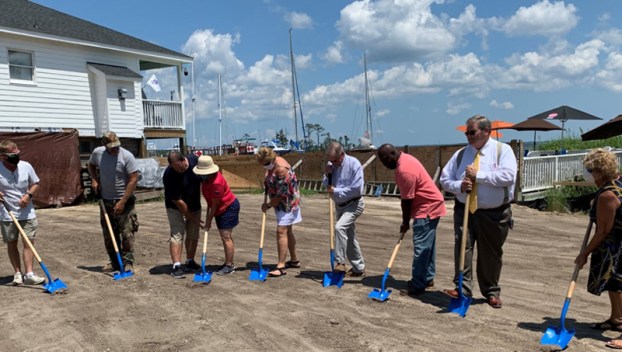 The groundbreaking ceremony was held at the Dowry Creek Marina, east of Belhaven, last Tuesday for The Salty Crab, a new waterfront restaurant and bar to be constructed adjacent to the current Dowry Creek marina market, clubhouse and pool. The event was attended by North Carolina Representative Keith Kidwell, Beaufort County Commissioner Frankie Waters, Belhaven Mayor Ricky Credle, Jean Ham, president of the Dowry Creek Homeowners Association, Diana Lambeth, executive director of the Belhaven chamber, and many others.

The 4800-square-foot restaurant and bar will be located directly on the waterfront overlooking the Intracoastal Waterway, panoramic Dowry Creek and the marina’s pool and docks. It will have an elevated waterfront view seating in the bar and restaurant for 154 people. Like the marina, the restaurant will be open seven days a week.

“We’ve got a lot of boats that stop in Belhaven, whether they stop here or at the other marinas,” said Dowry Creek Marina owner Steve Zeltner. “But there’s an awful lot of boats that just keep on going right on by. … They aren’t pulling off and are just bypassing Belhaven. We’re trying to draw them in.”

The Salty Crab will serve a reduced boater’s “quick breakfast” menu in the mornings, and will serve the lunch and bar menu from 10 a.m. to 10 p.m. daily, featuring pizza, burgers, sandwiches, salads and more. Dinner casual dining will be available from 5 to 9 p.m. daily, featuring local seafood and other North Carolina dining favorites. The event room will be open for groups or overflow dining, and the main dining area will be available for casual late morning and afternoon dining as well as provide table and computer connection space for boaters to use as their informal office while staying on their boats overnight or long term at the marina. 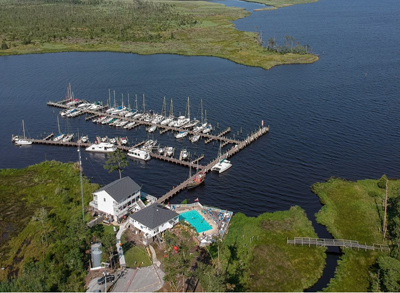 OVERHEAD: In the past two years, business at Dowry Creek Marina has spiked under the ownership of the Zeltner family. The marina’s new restaurant, The Salty Crab, will likely increase that business even more. (CatieJo Black Photography)

“We’re trying to be that one-stop for them, and the restaurant really was the missing piece,” Zeltner said.

The Dowry Creek Marina is the largest Marina on the Pungo River, with 73 deep-water boat slips and 750 feet of face dock space for boats up to 200 feet with drafts up to seven-and-a-half feet. The marina is conveniently located along the ICW at mile marker 132, at Pungo River green day marker 15. The Marina is open to the public, featuring VALVTECT marine diesel and non-ethanol gas at the pier and a well-stocked market that is open seven days a week. The marina also has a saltwater swimming pool open for public memberships, a tennis court, an LP gas tank refill station, a boater’s clubhouse, showers and ample parking. By car, Dowry Creek Marina is located adjacent to the upscale Dowry Creek Housing Area, just off Highway 254 east of Belhaven.

“This brings jobs not just to that marina, but to mechanic firms and all of Beaufort County really,” said Kidwell. “He’s going to have that restaurant, and people are going to go into town and go to the Tavern at Jack’s Neck, Spoon River, Fish Hooks, Food Lion, the marina supply stores, the tackle stores; there’s going to be so much happening from that. It’s going to be a ripple effect that will be good for Belhaven and Beaufort County as a whole.” 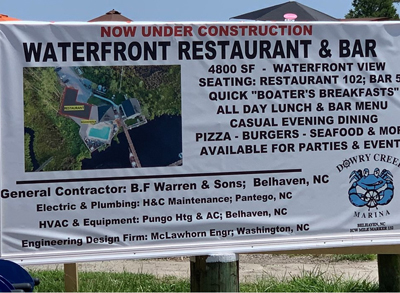 LOCAL BUSINESS: In addition to bringing new jobs to Belhaven upon completion, the project will also employ a variety of contractors from Beaufort County. (Dowry Creek Marina)

The Salty Crab will be the only full service restaurant along the Pungo or Pamlico River portions of the ICW. It will span a large gap in service currently offered to boaters traveling the ICW, positioned midway between the restaurants in Oriental, 45 miles to the south, and Coinjock, nearly 75 miles to the north, on the other side of the Abermarle Sound. The Salty Crab Restaurant and Bar will compliment the current services offered at Dowry Creek Marina, and is sure to make it a must stop for day boaters as well as those traveling north or south along the ICW.

When I first wrote about COVID-19 and its impending impact on our region on March, I shared it would take... read more