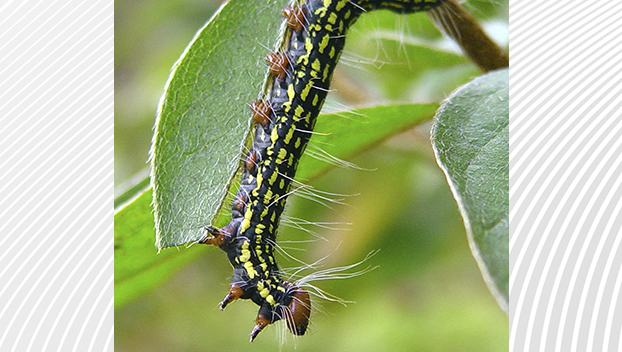 HUNGRY CATERPILLARS: The culprit behind those holes in your azalea leaves, among other flowering plants, could be the azalea caterpillar, also known as the “Labor Day worm.” (Chris Evans/University of Illinois/Bugwood.org)

What is this worm on my azaleas?

This week’s question comes from Chocowinity. This very colorful worm (a.k.a. caterpillar) on your azaleas is an azalea caterpillar (Datana major). They are very destructive little critters! In large enough numbers, they can defoliate an entire bush. Often, they are not noticed until the damage is already done!

The azalea caterpillar hatches around mid to late-August, earning the name Labor Day worms. Typically, we do not notice them until the damage is seen. The eggs are on the underside of the leaf and packed in as a tight cluster of white eggs numbering 80 to 100. The eggs will hatch, and the young caterpillars will emerge having a yellow body with black stripes and a red head. As they grow, they will molt to a black body with yellow dots, the red head may or may not, turn almost purple. The way to distinguish caterpillars from other insects, such as sawflies, is by the three sets of legs near the head. The azalea caterpillar will raise its head and curl its tail when disturbed to form a shape like the letter “C.” There are a few others that do this but not many.

Upon eating their fill of your azalea, they will crawl down the plant and burrow into the soil to pupate. It is here that they will spend the winter. In late spring they will emerge as adult moths and begin the process all over again. Do not worry about handling these caterpillars, they are completely safe. They may however, regurgitate yellow juice onto your hand!

In a homeowner situation, it is really best to pick the caterpillars off of the bush and smash them or place them in a bucket of soapy water. You can pick them off by hand if there are just a few, or you can shake the bush to remove them. If the infestation is really bad, you may need to go to a product containing B.t. (Bacillus thuringiensis). This is a natural, organic product that will control the young caterpillars. It is marketed under names such as DiPel. Spinosad is another organic insecticide that will work on caterpillars and some beetles. There are insecticides that will work such as Carbaryl (Sevin), Acephate (Orthene), and pyrethrin-based insecticides that end in “-thrin.” The insecticides are much more harmful to the beneficial insects on the bush, so beware of aphid or spider-mite spikes after using an insecticide. This is due to killing all of the beneficial insects that are predators of these pests.

Azalea caterpillars will only feed on rhododendron species, for the most part. There has been documentation of feeding on blueberries, however. So, if you have other azaleas, rhododendrons or blueberries, be sure to check them all!

Extension Master Gardener volunteers give back to the community by running a plant clinic here in Beaufort County. Homeowners can call the Beaufort County Center on Mondays or Wednesdays between 10 a.m. and noon for a diagnosis and help with their plants.

EMGV’s become certified by learning about horticulture through the local agent and specialists from across the state. They are required to have 40 hours of classroom instruction and a 40-hour internship to complete their certification. Once certified, EMGVs give back to the community through information services, diagnosing plant problems and speaking bureaus.

There is a hybrid virtual/in-person training coming up in September. If you are interested, fill out the application and submit to the Beaufort County Extension Center. You will be contacted for an interview, then invited to attend classes. The application can be found on the website beaufort.ces.ncsu.edu.

From The Salvation Army of Washington WINDSOR — As Capt. Teresa Bush picked her way through a field in Windsor,... read more