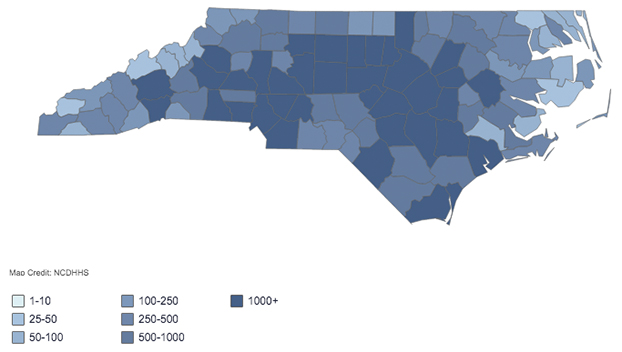 Beaufort County had a total 437 confirmed COVID-19 cases as of Monday, an increase of nine overnight. There are currently 142 active cases in the county and 11 people are hospitalized, according to the Monday update from Beaufort County Emergency Services and Beaufort County Health Department.

Contact tracing of the known, confirmed cases has concluded:

The number of confirmed COVID-19 cases in North Carolina continued to rise from 136,346 Sunday to 137,410 Monday. There have been 2,197 deaths in the state attributed to the virus, an increase of five overnight. The state currently has 1,111 COVID-19 associated hospitalizations and 105,093 people are presumed recovered from the virus in North Carolina.

“Sixty-four of our total positives were asymptomatic at the time of their test,” the update reads.

There had been 5,111 tests completed in Beaufort County as of Monday, with 4,596 negatives, 426 positives and 89 pending. These are cumulative numbers and include tests performed at the health department and reporting private medical facilities through the county. Nine of Beaufort County’s cases were tested in other counties but are Beaufort County residents.

“There were approximately 1,000 tests completed in Beaufort County last week,” the update says.

Across Beaufort and Hyde counties, most local students will return to school starting next week, in some form or fashion.... read more