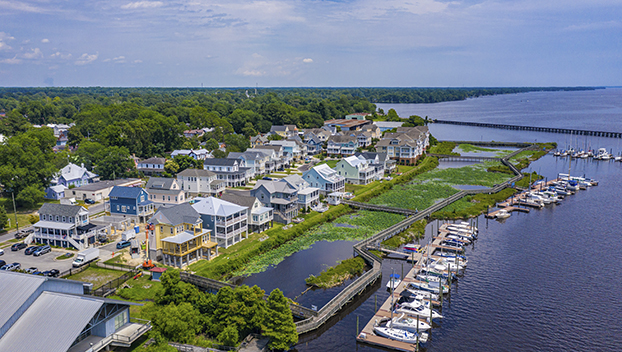 ADDING ON: The construction of Moss Landing Harbor Homes will continue with the purchase of the waterfront property just east of the Water and MacNair streets intersection, long the home of Builders First Source. Beacon Street is working with the building supply company to transition to a new location. (Beacon Street)

A little more than five years ago, the landscape between the North Carolina Estuarium and Moss Landing townhomes was a grassy, unused lot, framed to the north by Water Street and to the south by wetlands, the boardwalk and the Pamlico River. Today, that parcel of land is a thriving waterfront neighborhood, seamlessly blending with the historic district that surrounds it. It’s a place where people sit on their porches and neighbors stop to chat — a place with a true sense of community. And that community is about to grow.

“We’re pretty excited, as you can well imagine,” Wiley said. 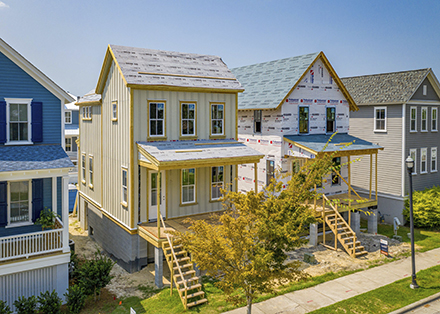 REIMAGINED: Water Street is not the Water Street of old, but has been completely reimagined as a walkable, bike-able community featuring smaller cottages as well as larger waterfront homes with spectacular views of Pamlico sunrises and sunsets. (Beacon Street)

Wiley said, in the past, he’d spoken with the previous owners — Tomp and Bill Litchfield — about the property’s possibilities, but as the Builders First Source lease was ending, that dialogue was renewed.

“We’ve had a lot of conversations for a long time, but it was actually a really quick decision to close on the property,” Wiley said.

The property consists of nearly 7 acres that run from MacNair and Water streets to Charlotte Street along the banks of the Pamlico. While Wiley said the plan is to start construction around mid-2021, the Beacon Street team will be taking its time determining what, exactly, will be built there. They’ve enlisted the assistance of Atlanta and New York-based Historical Concepts, a firm specializing in new architecture based on the unique heritage and traditions of a place.

“The main thing that’s in store for us is doing what we love to do, and that’s really take a deep breath and absorb what we’ve learned, working with our team and the community as to what should be there,” Wiley said. “I think the predominance of the plan will be single-family homes like the kind that you’re seeing at Moss Landing right now. There’s a desire and a need, and it lays out beautifully on the property as an extension of the historic district.”

The current phase of Moss Landing Harbor Homes is wrapping up; only a few home sites remain. The neighborhood has drawn natives, long-time transplants and newcomers alike, proving the appeal of the original plan to design not individual structures, but with the overall community in mind.

“What we’ve learned the most is that people love Washington. They love the community; they love the walkable, bike-able; they love the sense of place — ‘This is my community,’” Wiley said. “People want to invest in what is really important right now, and that’s simplification. What we had hoped would be the sense of community in Moss Landing has really turned out.”

“We’ve been encouraged by the number of folks that are making this their primary home,” said Justin Hime, Beacon Street’s sales and marketing director. “The neighborhood is thriving. When we think about Moss Landing, we think about what’s been fostered there, which is a great community. Our job in planning is secondary.” 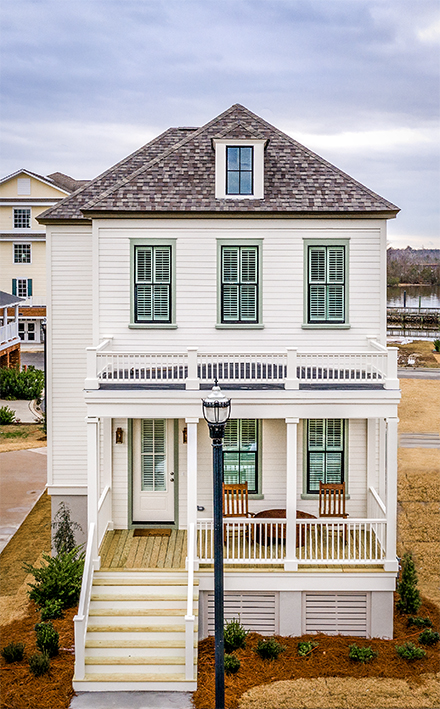 THE DRAW: From cottages to spacious waterfront homes, Moss Landing Harbor Homes has drawn natives and newcomers to the neighborhood that’s less about houses than it is about creating community. (Beacon Street)

But planning is important: the goal with the next phase of Moss Landing is, like the first phase, to reflect the historic neighborhood in new home design and tie in with the landscape and infrastructure that surrounds it — potentially creating a conduit from downtown all the way to Havens Garden.

“We’re going to continue reintegrating this land back into the fabric of the historic district — weave it in, and maybe one day it’s not even referred to as Moss Landing,” Wiley said.

“We want to continue to engage with our neighbors and have a disposition of collaboration,” Hime said. “If folks have an interest, we would love for them to reach out to us directly.”

“We’ve gotten really positive feedback from our homeowners; they’re very excited to see it continued,” Wiley said. “We’re really excited about a lot of the conversations that we have had and continue to have with people around the community. I feel like it’s feeding on everything else that is happening in downtown Washington. It’s almost like it’s really going to strengthen that whole connection, as well.” 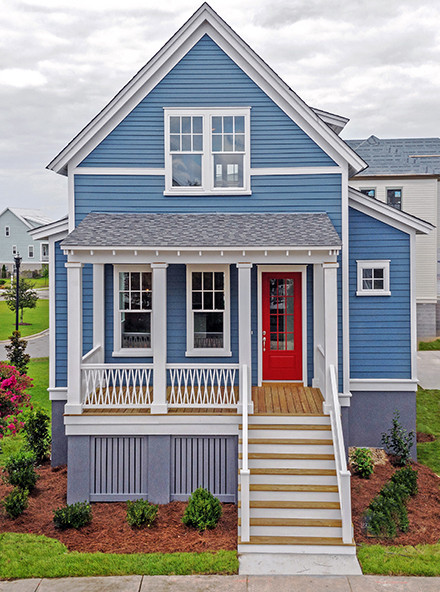 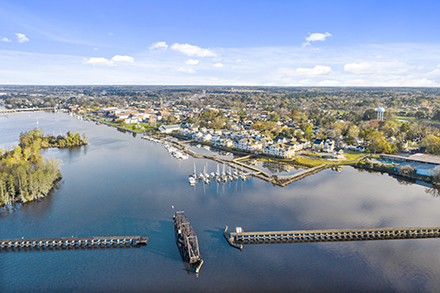 An aerial view of the Moss Landing neighborhood also shows were the new phase of construction will start, where the large building in the far right of the photo currently sits. (Beacon Street)

The City of Washington is hoping to open a new license plate agency for Beaufort County by the end of... read more