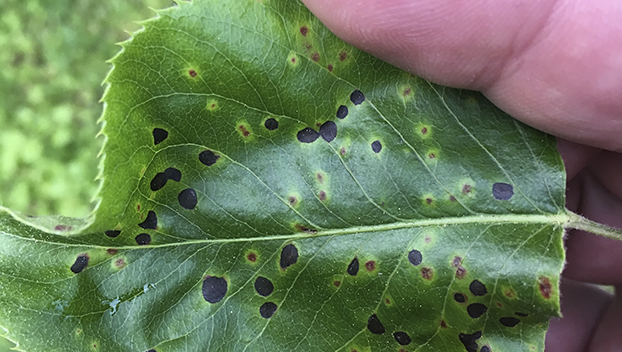 LOOK FAMILIAR?: Fabraea leaf spot has been spotted on many local pear trees this year. Cleaning up, pruning and a fungicide might be the cure. (Cooperative Extension Service)

I am seeing something on pears that I haven’t seen in the past four years since taking this position. Not that I think I have seen it all, by any means! One thing I can count on in this position, and that actually I look forward to, is learning new things almost on a daily basis. This is not a new disease, but it is one that I do not normally see.

Over the course of the five seasons I have been doing this, I see new problems every year that seem to be major issues that year but then disappear the next season. Or, at the very least, lessen in number. Two years ago, I saw major issues in large trees, especially oaks. Last year, I saw major issues with pines, upwards of 30 calls for pine beetles. This year, there are multiple issues: lots of dead spot and gray leaf spot in St. Augustine grass, lots of large patch in centipedegrass and now Fabraea leaf spot in pears.

The first two are not uncommon, but I am seeing more than I normally would. If you think you may have one of these issues, give me a call — especially with large patch, because the time period in which we can treat is quickly coming up in October.

If you have pears and your tree has turned yellow and defoliated, you may want to give me a call! Most years, I would chalk this up to fire blight, but this season, it very may well be my favorite new leaf spot, Fabraea. This leaf spot is characterized as having a circular outline that is dark brown to nearly black, with a purple margin. The spots will enlarge and develop pycnidia, which look like black volcanoes within the spot. When it rains, this volcano will erupt into a gelatinous mass of spores, spreading the problem. This disease will affect the fruit with lesions, as well. These lesions are dark and sunken in appearance. Fruit lesions can be so numerous as to cause the fruit to crack. Lesions can also occur on the current season growth of twigs. These lesions are “purple to black with indefinite margins,” according to PennState Extension. Twig lesions can run together to form a superficial canker as well.

If you are like my 4-year-old, Willa Grace, you may ask “Why?” Why do these things show up some years and not in others? For both insects and, even more so, disease, it is because conditions have been conducive for them to be prolific. In the instance of the pine beetles, every last one of the infestations I found last year were near a body of water and had been flooded out the previous year. In the instance of disease, it goes back to environmental conditions being just right for an explosion of the disease.

This leaf spot disease can result in early defoliation, which has a number of issues in and of itself. Fruit can be quite small, if it is viable at all. New buds (next year’s fruit) can have very weak formation, resulting in poor fruit set next season. Lastly, defoliation, just as we experience with hurricanes, can result in fall bloom. If this occurs, there will be little to no fruit next year because those blossoms are next season’s fruit.

So, what can you do? Cultural controls are always the first line of defense against disease. The very first cultural control in this situation is sanitation. Pick up all of the leaves and destroy through fire or bag and send to the trash. Next, a good pruning to remove any diseased twigs and branches should happen in late January. Prune pears and apples to a central leader system (making sure there is but one dominant stem or trunk), with sets of scaffold branches growing outward from the main trunk to bear fruit. Remove any dead, diseased or damaged wood with sharp tools. Look for fire blight cankers — these resemble green wood that has been put in a fire and then taken back out. Make your cuts 2 inches below the dead tissue resulting from the cankers. Prune any twigs that will shade out fruit or that will be shaded (everything growing straight up or straight down).

On large trees, application of chemicals that control disease are really tough for a homeowner to make. In an orchard situation, an air-blast sprayer is used to cover the entire tree. If your tree is small enough to safely and effectively apply a fungicide, use chemistries containing the active ingredient ferbam, ziram, mancozeb or fixed copper compounds. These application should begin when full leaf is out and then two to three follow-up applications on two-week intervals should be made. The North Carolina Agricultural Chemical Manual has a spray schedule outlined for apples that is recommended for pears as well. The manual can be found online or purchased from your local extension center.

If you have a question to submit, email to Gene Fox at gene_fox@ncsu.edu. If you’re having trouble with growing in your home landscape, call the Extension office at 252-946-0111 and speak to an Extension Master Gardener volunteer, Mondays and Wednesdays between 10 a.m. and noon. Until then, happy gardening!

The Humane Society of Beaufort County is giving supporters a second chance at a prize. Delayed since its original date,... read more