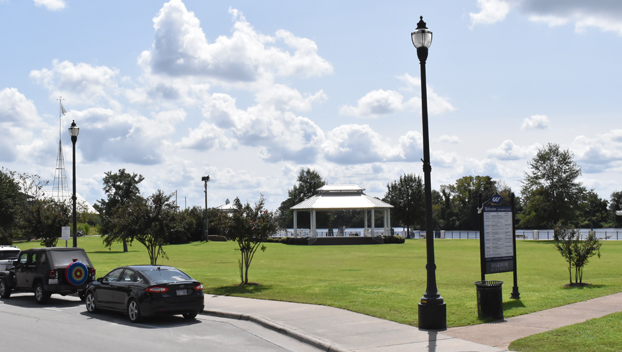 LOOKING OUT HIS FRONT DOOR: During his tenure as mayor, Mac Hodges spent much time greeting residents and visitors alike in Festival Park and along the Washington waterfront. Now, the park will be named Mac Hodges Festival Park in his honor. (Matt Debnam/Daily News)

One of Washington’s waterfront parks has been renamed in honor of the late Washington Mayor Mac Hodges, following a unanimous vote of the Washington City Council on Tuesday evening. Festival Park will now become “Mac Hodges Festival Park.”

“When the City of Washington approached us about renaming the park, we were touched,” said Hodges’ daughter, Beth Hodges Fickling. “My dad worked tirelessly to have the park built. He had a vision that the park would bring people in Washington together by giving families a place to gather. He saw the park as an opportunity to provide a scenic location for concerts and weddings. It was fitting that we held his memorial in the park he fought so hard to create. It means so much to us that the city would recognize him in this way.”

Located on Water Street, between the North Carolina Estuarium and Stewart Parkway, the park was a special place for Hodges. The apartment he shared with his wife, Lou, overlooks the space, and he spent many days greeting both residents and visitors to Washington there, always making them feel welcome. City Councilwoman Virginia Finnerty, who was also a close personal friend of the mayor’s, says that adds another layer of meaning to the name change.

“I think it’s extremely appropriate, because it was one of his projects that he got accomplish, and I think it’s been hugely successful,” Finnerty said. “He wanted people down at the waterfront, enjoying the river, and people come from all over to enjoy that park. I think it’s a wonderful way to honor him. He would sit on his porch and say ‘Hello’ to everybody that walked by.”

In addition to renaming the park, the City of Washington is also working with the Washington-Beaufort County Chamber of Commerce to raise funds to place a swing in the park in Hodge’s honor. So far, WBCC executive director Catherine Glover says the fundraiser has brought in $1,500. Any money raised beyond the cost of the swing will be used for beautification efforts downtown.

“We’re still accepting donations for that and still pricing how much that swing is going to cost,” Glover said.

Anyone wishing to donate towards that effort may do so by writing a check to the Washington-Beaufort County Chamber of Commerce Foundation, with the subject line “Mac Hodges Memorial.” Donations are tax-deductible and can be dropped off at the Chamber or mailed to P.O. Box 665 Washington, NC 27889.

A little more than five years ago, the landscape between the North Carolina Estuarium and Moss Landing townhomes was a... read more