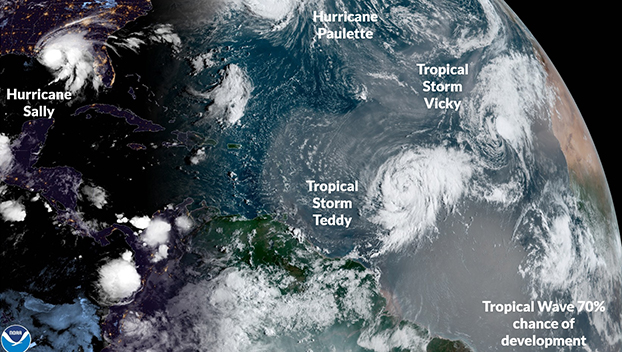 OCEANIC ACTIVITY: Four named storms and a potential fifth are all active in the Atlantic and Gulf of Mexico right now in what is the heart of the hurricane season. (National Hurricane Center)

Heart of the hurricane season may deliver remnants of Sally

As Hurricane Sally batters the northern Gulf Coast, National Weather Service Newport/Morehead City is alerting eastern North Carolinians that Sally’s impact may be felt here in the latter part of the week.

According to NWS Newport/Morehead City Warning Coordinator Meteorologist Erik Heden, there’s still a lot of uncertainty about the track of Sally.

“We may see some impacts from the remnants of Sally including localized heavy rain and the possibility of stronger storms late week. This is all dependent on the track and timing. Both are too uncertain right now to give specifics for our area,” Heden wrote in an email on Tuesday.

Eastern North Carolina has already seen more rain than usual this summer. NWS Newport/Morehead City released its August 2020 Climate Review — found on the NWS website — which shows rainfall totals in nearly all measured locations in the agency’s service area were above normal this August. The town of Beaufort came in at 4.02 inches above normal for the month (11.72 inches, compared to 7.70 inches), while locations closest to Beaufort County had totals still above, but closer to, normal rainfall: Greenville, 1.53 inches above normal; Plymouth, 3.03 inches; and Williamston, 2.36 inches.

September could produce more rain for eastern North Carolina, if Sally or one of the Atlantic’s other three named storms — Paulette, Teddy and Vicky, plus a tropical wave that has a 70% chance of becoming Wilfred — tracks toward the coast. According to Heden, Paulette’s danger to eastern North Carolina is in the distant hurricane’s swell potentially causing ocean overwash of roads and rip tides on the Outer Banks. Teddy is forecasted to become a major hurricane as it tracks toward Bermuda.

“We are in the heart of the season. If you look historically, right now is when we expect the tropics to be their busiest,” Graham said in a video earlier this week. “It’s been busy already, but we’ve still got a ways to go. … Make sure to have that plan. Listen to those local officials, know where you’re going to go if they tell you to evacuate, have the supplies.”

Rain, wind forecasted through the weekend

Unpredictable and rainy weather is what’s in store for eastern North Carolina through the weekend, according to Erik Heden, warning... read more