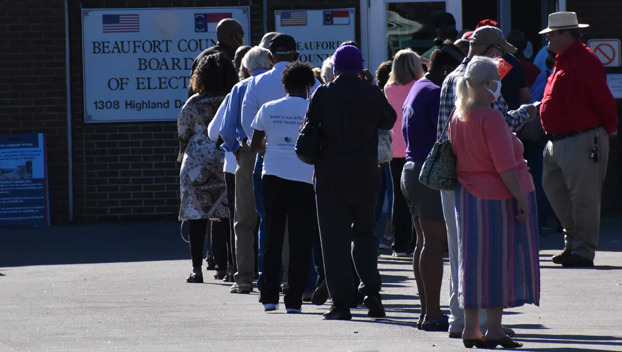 OUT THE DOOR: A line of voters stretches out the door at the Beaufort County Board of Elections on the first day of one-stop voting Thursday. Inside, the line continued to snake through the building. Between a big first-day turnout and a long ballot, elections officials say some voters experienced longer-than-usual wait times. (Matt Debnam/Daily News)

As polls opened in Washington and Chocowinity on Thursday for the first day of one-stop voting, longer-than-usual lines and wait times greeted voters at both locations, as hundreds of people turned out to perform their civic duty. According to final figures shared by the Beaufort County Board of Elections on Thursday, 1,963 people participated in one-stop voting on opening day, with 1,334 voting in Washington and 629 casting their ballot at the Chocowinity site.

“We definitely voted more people today than any other single day that I know of,” said Beaufort County Board of Elections Director Kellie Hopkins. “It’s not as much as I thought it was, because the lines are not moving as fast as we have seen in previous elections, because this ballot is so long.”

Hopkins says that the first and last days of one-stop voting usually see the heaviest turnout, with activity sagging in the middle of the 15-day period. This year, the Board of Elections has also seen an increase in absentee ballot requests, with many voters hoping to avoid potentially crowded polling places during the COVID-19 pandemic. As of Thursday, 4,036 Beaufort County voters had requested absentee ballots. Of those, 1,847 had already returned their ballots.

“This election, you can’t compare it to anything we’ve ever had before,” Hopkins said. “With the pandemic and voting trends, some people are leaning toward mail-in ballots and others are wanting to do it in person. Then we have that group that only votes on Election Day. My gut tells me we’re going to have a very good turnout all three weeks.”

“I think two things are driving that,” Hopkins said. “I think COVID has a little bit to do with it, especially the increase in absentee ballot requests. I think people also were coming here to avoid Election Day, because usually the line isn’t that long. Also, what we’re seeing and feeling is the interest in this particular election. Everybody’s just been intense about this election.”

One-stop voting will continue at the Board of Elections and the Chocowinity Fire Department, six days a week through Oct. 31. Voting sites in Aurora and Belhaven will open their doors starting Oct. 24.

“We ask that you space yourself out if you’re coming to vote early, and remember that Chocowinity is also open,” Hopkins said. “Later in the day, after 5 p.m., the line seems to die down.”

During one-stop voting, polling places at the Beaufort County Board of Elections, Chocowinity Fire Department, the John A. Wilkinson Center in Belhaven and the Aurora Community Building will maintain regular hours from 8 a.m. to 7:30 p.m. on weekdays, and from 9 a.m. to 7 p.m. on Saturdays. The only exception is Oct. 31, when polls will be open from 8 a.m. to 3 p.m.