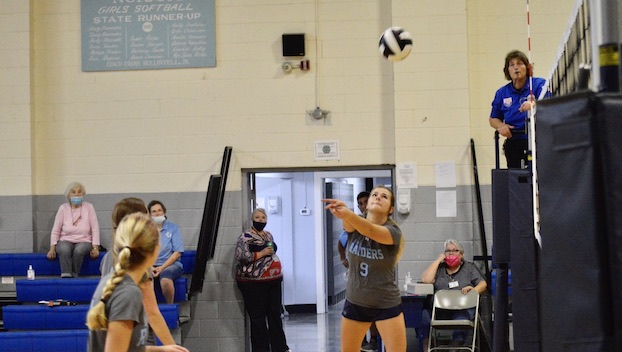 Pungo Christian Academy senior Lauren Ricks sends the ball over the net during the Raiders sweep of Community Christian Tuesday.

It was over in 53 minutes. The Pungo Christian Academy Raiders advanced to the second round of the North Carolina Independent Schools Athletic Association (NCISAA) 1A state tournament with a decisive 25-10, 25-12 and 25-5 victory over Community Christian of Wilson Tuesday evening at home.

PCA has lost only one set all season and didn’t come close Tuesday night. The Raiders blasted out of the gate and built insurmountable advantages (9-0, 14-5 and 12-2) early in each set to never let the Cyclones (2-7) get established. Strong serving from junior Haley Elliot and seniors Riley Cutler and Emma Williams along with sophomore Reagan Stoop helped the home team reel off multiple points in a row to control the match.

“We were obviously ready to play and were pretty aggressive early,” Coach Melanie Eddleman said. “Our three seniors (Cutler, Laura Ricks and Williams) gave us strong leadership as usual and we executed well in all areas.”

Williams led PCA with seven service aces, while Stoop, the two time conference player of the year contributed a team-high eight kills. NCISAA rules have loosened to where each home player was allowed two fans to watch. Other personnel deemed essential added to the atmosphere inside the sweltering gym. All in attendance wore masks, including two of the three officials. The teams did not switch sides after a set and waved to each other instead of going through the usual post-match handshake line. Exhaust fans were going and the doors were open behind the Raiders side of the court, to little effect. It was all part of home court advantage.

“It was great to start the tournament at home and we’re excited for our next match Friday,” Eddleman said. “I’m very proud of our effort and the results, so if we can build on this every match the rest of the way, we’ll be okay.”

When the North Carolina High School Athletic Association loosened restrictions enough to where schools could do more than condition, Northside... read more