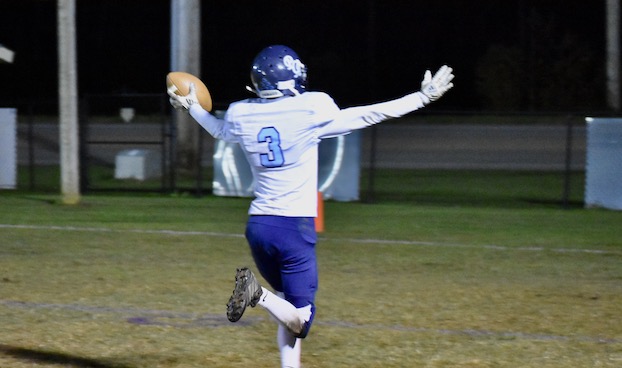 Only in a crazy, mixed-up COVID world can three victories be enough to claim a championship, but here we are.

Like the other private schools who decided to forge ahead with football in the fall, as opposed to waiting until February like the public schools must, PCA’s schedule has gone from 10 games, to six and now to four with possibly two more post-season games ahead.

“We’ve almost always played nine or 10 games in past seasons, but COVID tossed that out the window pretty quick,” said Raiders coach Stacey Keech. “We weren’t sure we going to get to play at all when we started practicing back in July, but we planned to play our three conference opponents twice to give us six games. Our guys have been through a lot and worked hard, so they deserve to be conference champions.”

PCA blasted out of the gate with consecutive victories, then had a scheduled bye week. That turned into two more weeks of quarantine when a test came back positive, forcing a pause in practices and games while everyone isolated.

“We had one case with very mild symptoms despite all our protocols and precautions, so none of us saw each other for two weeks,” Keech said. “I took my camper to a campground and slept in it, then spent two nights in my garage just to protect my family. Our two opponents (Bethel Christian of Kinston and Lawrence Academy) both had cases, so we wouldn’t have played anyway, but it was a long time away from each other.”

The Raiders returned to their normal practice routine last Monday and even practiced Saturday because Keech didn’t want two consecutive days off before a game.

“We had an outstanding week of practice and the kids were happy to be back on the field,” he said. “The time off gave some of our nagging injuries a chance to heal, and we reviewed fundamentals every day last week. I’d say it paid off pretty well.”

Pungo led 28-22 at halftime, stretched it to 42-30 after three quarters, then tacked on 22 points in the fourth quarter to raise their record to 3-0.

Junior quarterback Tristan Mann was sharp all night, completing 11 of his 13 passes for 277 yards and six touchdowns. He also ran for 63 yards and another touchdown. Classmate Josh Reynolds caught six passes for 124 yards and three touchdowns with an interception on defense. Fellow junior Fortino Beltran caught four passes for 132 yards and two touchdowns, then added 67 rushing yards with another score.

Beltran tied a school record with 24 tackles on defense, while Ian Swindell and Ben Russel each had eight tackles. The defense picked off two passes and recovered a pair of fumbles, including one from Devin Cadle that resulted in a 50-yard scoring run.

“Tristan and Josh played their best games leading to some big plays on offense and we tackled extremely well on defense,” Keech said. “Tristan has worked on his scrambling and throwing on the run all week, and Josh ran good routes to get open. Fortino was all over the place tackling people. I told them to enjoy it, because it might be the only time they’ll be on Monday night football.”

The Raiders end the regular season Friday in Goldsboro against Wayne Christian. They will host the semi-final 1A state playoff game the following Saturday. The title game is set for Nov. 20 at a neutral site.