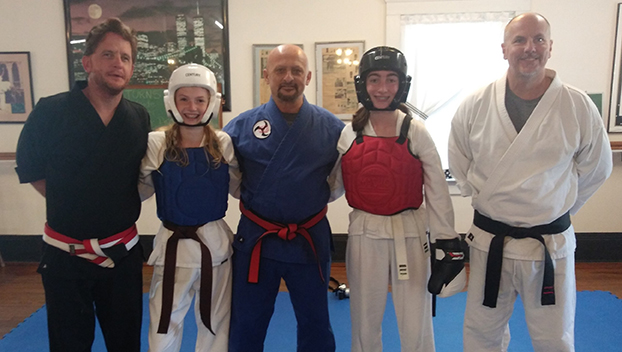 There might have been a few trick or treaters walking around Washington on Halloween dressed as the Karate Kid, but Mena Tankard wore her uniform for real during a four-hour exam that morning.The 14-year-old freshman at Washington Montessori Public Charter School passed the test with flying colors to earn her green belt from the Washington Karate Academy. “Mena is my only student to make rank this year other than one white belt,” Grand Master (Hanshi) and WKA owner David Warren said. “It takes a little over a year of solid work two to three times a week to earn a green belt and she’s put in the time to achieve that goal.She’s fun to teach because of her sense of humor during class,and she always gives me the thumbs-up signal when she completes a move and when she goes out the door at the end of class.” Tankard’s test started with a one-mile run, followed by sets of 25 sit ups and push-ups that she could be commanded to do at any time.She had to do a total of 150 each before the end of her exam.Warren, along with associate instructor (Renshi) Josh Chandler and Greg Berry (Black Belt Teacher-Sensi), put her through a series of six different exercises that proved she had mastered different forms, followed by two weapons tests that proved competency with the Bo—a 6-foot staff—and the Tonfa, an 18-inch-long wooden implement. The Okinawans used them as farming tools until they turned them into weapons when the Japanese invaded during World War II. Karate literally means “empty hand,” but WKA is among the dojos that teach the sister martial art of Kobudo, which involves weapons.Tankard also had to give an oral history of the Okinawan karate style of Goju, naming the seven teachers of the different hand styles that comprise the technique. Additionally, Mena illustrated five different kicks for form and focus, as well as kicking forearm shields held by one of the black belts to test her power. Near the end, Tankard showed her skills in self-defense. She practiced 12 defensive moves while her classmate, Leanna Hudson, attacked her.The exam wrapped up with the kumite or fighting section. Tankard fought with Hudson, who is an advanced brown belt, and Chandler, a5th-degree black belt. She had to spar several rounds with either or both of them.“I was super-nervous at the beginning, but I settled down during the run and got into the right mindset and just pushed myself,” Tankard said. “It was fun, and I was exhausted at the end, but I was really proud of myself.Karate has helped me a lot since I started going a year and a half ago. I used to be really shy, but now I’m more comfortable and confident in different situations. It’s helped me learn self-control and mental discipline.”Warren leaves fliers that advertise WKA at various businesses and attractions around the area. Tankard’s stepmother works at the North Carolina Estuarium on the Washington waterfront and brought one home. “She signed up for a trial class for me and my little sister without telling us about it,” Tankard said. “I had tried a bunch of other sports, but this is definitely my thing. I thought it was just kicking and punching, but it’s much more of an art. I’m going to stay with it and am already working on my brown belt.”Tankard’s long day ended with a late lunch at Pizza Inn with herfamily,Warren, Berry and Chandler. That’s how the Karate Kid celebrates Halloween.
You Might Like

Only in a crazy, mixed-up COVID world can three victories be enough to claim a championship, but here we are.... read more