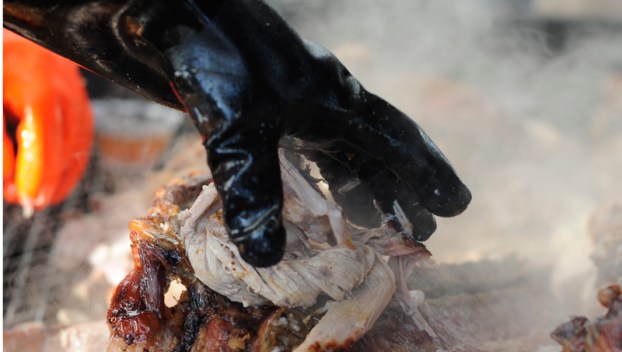 ‘Smoke on the Southside’ a good deal, great meal with a new twist

CHOCOWINITY — BBQ lovers are expected to keep their favorite celebrities busy this Saturday, as the Chocowinity Volunteer Fire Department serves up its well-known mix of the eastern North Carolina favorites at “Smoke on the Southside” BBQ pig competition. A new honor has also been added to the squad’s annual BBQ event’s reputation as one of Beaufort County’s favorites.

“This is the first year we’re doing it with organizers as a sanctioned event of the Whole Hog BBQ organization under the umbrella of the North Carolina Pork Council,” said Chocowinity Fire Chief Tommy Pendley.

The upgrade adds a good amount of pork prestige to his department’s annual event, because BBQ families and groups who enter this year’s event will be evaluated by four judges from the North Carolina Pork Council.

“These aren’t just people who love BBQ. To be a judge with the Pork Council, they’ve got to go through training classes that include about five hours in different BBQ-related locations,” Pendley said.

Also greasing the gears of popularity, several “celebrity cooks” from eastern North Carolina’s BBQ community will participate this year. So far, they include D.J. Stox, who won the 2020 state championship in the “natural source” category; Kevin Peterson, of Benson, a previous state champ in the gas BBQ group; and Andy Harrison, who won in the gas division at Belhaven’s competition three weeks ago. Beaufort County will be represented by at least three of its own BBQ-ing celebrities: Thomas Spruill, of Belhaven; James Johnson, of Chocowinity, and Wesley Bowers, of Washington, are each planning to compete.

Competitors pay a $150 fee to participate, all of which gets added to the total raised from sales of this weekend’s BBQ offerings. Pendley said every cent goes to the fire department to purchase updated equipment as well as PPE and similar pandemic-related items.

Visitors to the event do not have to pay to get in. They can, however, purchase what’s cooking in several ways. Plates laden with all that fabulous food will cost $8 each, and include either BBQ, chicken, or a combination of both. They come with slaw, red potatoes and hush puppies. Those wanting the BBQ alone may buy it for $5 per pound.

“We were originally going to charge $10 per pound, but we wanted to offer a bargain, especially since most BBQ of this quality level goes for $10 to $12 a pound,” Pendley said.

Also being offered is a “Family Deal” for $15, which includes 1 pound of pork BBQ, one pint of slaw, one quart of potatoes and an undisclosed, but probably large, amount of hush puppies.

The event will take place this Saturday, starting at 11 a.m. at the Chocowinity Volunteer Fire Department, 512 N.C. Highway 33 East, in Chocowinity. Though similar events end at around 2 p.m., a closing time has not been finalized.

The south side of the county is replete with wintering birds between November and early spring. Last week, a yellow-headed... read more